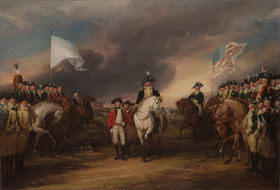 The Surrender of Lord Cornwallis at Yorktown by John Trumbull, 1797

QUICK FACTS
MAPS OF THE BATTLE

One of the most stubborn myths of American history is the idea that the frontier promoted equality of material condition. This national folk legend is, unhappily, ver much mistaken. With some exceptions, landed wealth was always highly concentrated throughout the southern highlands, as it would be in the lower Mississippi Valley, Texas and the far southwest. Inequality was greater in the backcountry and the southern highlands than in any other rural region of the United States.

I am more and more convinced that man is a dangerous creature and that power, whether vested in many or a few, is ever grasping, and like the grave cries, Give, Give.