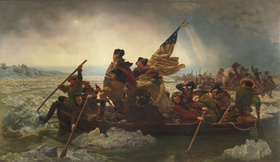 MAPS OF THE BATTLE

The most exciting scientific find of the period was Charles Willson Peale’s exhumation in 1801 near Newburgh, New York, of the bones of the mastodon, or mammoth. Peale displayed his mammoth in his celebrated museum and in 1806 painted a marvelous picture of what was perhaps the first organized exhumation in American history. Peale’s discovery electrified the country and put the word mammoth on everybody’s lips. A Philadelphia baker advertised the sale of mammoth bread. In Washington a mammoth eater ate forty-two eggs in ten minutes. And under the leadership of the Baptist preacher John Leland, the ladies of Cheshire, Massachusetts, late in 1801 sent to President Jefferson a mammoth cheese, six feet in diameter and nearly two feet thick and weighing 1,230 pounds.

It is time we have a government established & Washington at its head. But we are too poor for Monarchy, too wise for despotism, too dissipated, selfish & extravagant for Republicanism.