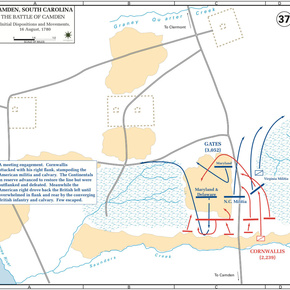 The men who lost America were also the men who saved Canada, India, Gibraltar, and the British Caribbean. The political leadership of the North government can be credited with the victory at the Saintes in 1782; the same year, Admiral Howe raised the Spanish siege of Gibraltar which had been heroically defended by a garrison of German mercenaries and British troops. In contrast to the British navy in the Chesapeake Bay, Howe was able to shield his transports and supply vessels behind his warships to enable them to relieve the garrison. This climactic end to the three-year siege was one of the most celebrated wartime subjects of artists like John Singleton Copley. The final voyages of Captain James Cook to Australia and New Zealand took place during the American Revolution, and the convicts formerly transported to America became the first settlers of Australia.

We must all hang together, or assuredly we shall all hang separately.

— Benjamin Franklin, 1776 (at the signing of the Declaration of Independence)