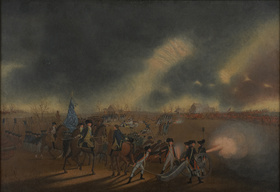 The Battle of Princeton (1782)
by James Peale

Ubi libertas ibi patria.
(Where liberty is, there is my country.)