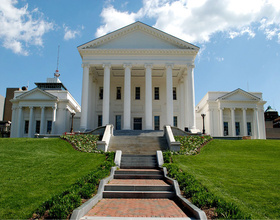 When Virginia’s capitol moved from Williamsburg to Richmond in 1780, Thomas Jefferson found an opportunity to design a capitol building that reached back to classical ideals but that also made a statement about the New World. He chose the Maison Carrée, a first century Roman temple in Nîmes, France, as the exterior model. And like Monticello, his own home building project perched atop a mountain, the Virginia capitol was placed on Shockoe Hill to overlook the James River and to dominate the Richmond skyline.

Though his design was adapted to fit the realities of construction that, in Fall 1785, had already begun, or the practicalities of functional use (entry was through the basement, rather than the elegant portico steps that were finally build in 1906) — overall, it was what Jefferson wanted built. It was a secular temple to liberty. It was the first public building in the New World to be constructed in the form of a classical Roman temple and its factual presence would shape the architecture of the future District of Columbia.

From 2004 to 2007 the Capitol was extensively renovated to provide more space for the executive, legislative, and judicial branches, but with sensitivity to preserving Jefferson’s original vision. Entry is now through the 27,000-foot square underground extension.

Guided tours take visitors through historic areas of the building, including the old chambers of the Senate and House of Delegates, the Jefferson Room, and the Rotunda, with its definitive statue of George Washington, modeled from life, by Jean-Antoine Houdon.

I set out on this ground, which I suppose to be self-evident, that the earth belongs in usufruct to the living; that the dead have neither powers nor rights over it. This, with its echo of the Declaration (self-evident) was Jefferson at his most terse. Except for the phrase in usufruct — a legalism meaning the right to use property for a certain time — Jefferson’s words could be chiseled in stone, or shouted on the hustings.