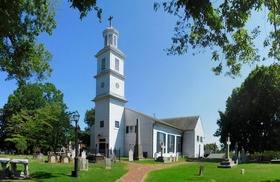 I know not what course others may take; but as for me, give me liberty or give me death!

With those now famous words by Patrick Henry in 1775, St. John’s Church became one of the canonical places of the American Revolution.

Built in 1741 by Colonel Richard Randolph (great-uncle to Thomas Jefferson), and referred to as the Old Town Church, St. John’s was the first church in Richmond. It was expanded in 1772 with a 40-foot extension, which gave the church a T shape, with the sanctuary reoriented at the top of the T. The original church was now the transept to a newly built nave.

It was this structure, because it was the largest in Richmond, that gave the delegates to the Second Virginia Convention a place to discuss what actions to take in their escalating conflict with the Britain. It was here that Patrick Henry gave the speech (to raise a militia) that ended with words that every American school child knows.

Today, St. John’s continues to be an active Episcopal church — the oldest wood-frame place of worship in Virginia — but with a significantly changed structure.

In the 19th century a number of alterations were made, including another extension (smaller than in 1772 and placed vertically atop the T), which gave the church the rough shape of a cross. Also a church tower and steeple were added in the early 1830s to what was now the main entrance (at the bottom of the T). Toppled by a storm in 1863, it was replaced in 1866, and then again in 1904, but replicating the design of the original tower and steeple — and this is what one sees today.

The Church adjoins a cemetery where several notable Virginians are buried. Guided tours begin at the Visitor Center. Reenactments of the Second Virginia Convention and Patrick Henry’s speech are performed by actors in period costume on Sunday afternoons during the summer.

At the end of March [1783] Franklin applied to [French Foreign Secretary] Vergennes for permission to publish a complete translation of the United States constitutions in French, the only language in which they could be widely read. He was eager to correct Europe’s misapprehensions about the new nation; he knew as well that he was offering up an advertisement for American trade and immigration.... Copies went out over the summer to the entire diplomatic corps and, in extravagantly bound editions, to Louis XVI and Marie Antoinette. The most influential of Franklin’s European publications the constitutions were universally well received.

The people never give up their liberties but under some delusion.