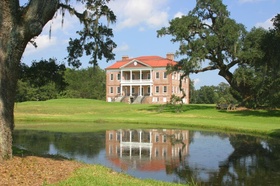 Drayton Hall on the Ashley River

It is difficult to recapture the intensity of excitement felt by Americans in 1776 over the prospect of forming new republican governments. It is a work, said Thomas Jefferson, of the most interesting nature and such as every individual would wish to have his voice in. Even the business of the Continental Congress was stifled because so many delegates — including Jefferson — left for home to take part in the paramount activity of erecting the new state governments. Constitutions, remarked Francis Lightfoot Lee, employ every pen. ... Nothing — not the creation of [the] confederacy, not the Continental Congress, not the war, not the French alliance — in the years surrounding the Declaration of Independence engaged the interests of Americans more that the framing of these governments.

The second office of the land [the vice presidency] is honorable and easy, the first is but a splendid misery.