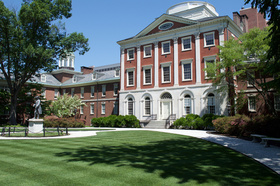 The Pine Building, completed in 1804

Founded in 1751, Pennsylvania Hospital was the first hospital in the American colonies. Founded by Benjamin Franklin and Dr. Thomas Bond, the east wing was completed in 1755 and the first patients were admitted in 1756. A three-part structure designed primarily by Samuel Rhoads (1711 - 84) — a member of the Carpenters’ Company and future mayor of Philadelphia — the hospital was built in sections as funds become available. The west wing was added in 1796; the unifying central structure completed the building in 1804.

Now referred to as the Pine Building (on Pine Street between 7th and 8th and a constituent part of Penn Medicine), the elegant architecture is considered to be one of the finest examples of the Colonial and Federal styles. It continues to house several medical departments in addition to administrative offices and both historic and contemporary libraries.

Self-guided walking tours are available after check-in; docent-led tours must be arranged in advance.

Entry through the main door on Pine Street is closed, so visitors enter through the newer hospital to the Gallery Pavilion, where Benjamin West’s large-scale painting, Christ Healing the Sick in the Temple, is hung. Originally requested in 1800 by the Board of Managers of Pennsylvania Hospital, West finally sent a finished painting in 1817. His note said in part: Mr. West bequeaths the said picture to the Hospital in the joint names of himself and his wife, the late Elizabeth West, as their gratuitous offering and as a humble record of their patriotic affection for the State of Pennsylvania, in which they first inhaled the vital air …

The graceful main entrance has twin opposing staircases; the floor is laid with the original Portuguese tile. Since fireplaces and candles provided heat and light, the Hospital had its own fire engine — on display under the staircase.

On the second floor is the historic Medical Library, the first such library in America. Begun in 1762, it includes medical, scientific, and natural history books — some written before 1500. Several plaster casts, used to teach nineteenth century medical students, are also on display.

Outside the library (on the east wall) is a portrait of Dr. Benjamin Rush by Thomas Sully. Rush, a signer of the Declaration of Independence, is acknowledged as the Father of American Psychiatry.

Beginning in 1804 and continuing to 1868, patients who underwent operations were carried on stretchers to the Surgical Amphitheatre on the third floor. There, a surgeon would operate in front of a seated circle of colleagues, medical students, and guests — for there was no concept of sterilization. Surgery was performed with whatever natural light shone through the skylight.

Dr. Philip Syng Physick, known as the Father of American Surgery, performed operations in the Amphitheatre as a member of the staff (1794 – 1813). Since there was no anesthesia, his patients would have chosen rum, laudanum, or a tap on the head with a mallet to lessen the pain.

Approved in 1774 but not planted until 1976 (for the U.S. Bicentennial), the garden is located in front of the west wing. It includes plants that were used medicinally in the 19th century.
Associated People
Rush, Benjamin
Bond, Thomas
Franklin, Benjamin