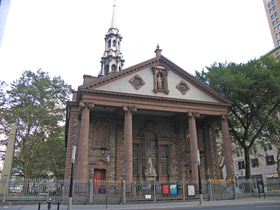 Completed in 1766, St. Paul’s Chapel is the only surviving colonial-era church in Manhattan. The Georgian Classic-Revival structure was used then, and now, as a satellite chapel for the Parish of Trinity Church. The architect is unknown, but as was the practice at the time, the design was taken from architectural pattern-books and the result resembles St. Martin-in-the-Fields in London.

Following Continental Army battles with the British in Fall 1776, a fire swept through lower Manhattan in September destroying some 500 buildings — including Trinity Church. St. Paul’s was saved with a bucket brigade. Throughout the British occupation of New York and after, until 1790, St. Paul’s became the primary church for the parish.

British Generals William Howe and Charles Cornwallis worshiped there. When he became president George Washington walked from Federal Hall, where he was inaugurated, to St. Paul’s to participate in a service with his wife Martha and both houses of Congress. Today, Washington’s pew is designated with the first U.S. Great Seal painted overhead.

In 1960, St. Paul’s was declared a National Historic Landmark for its architecture and its history.

The church and cemetery grounds are open to visitors daily; worship services are held every Sunday.