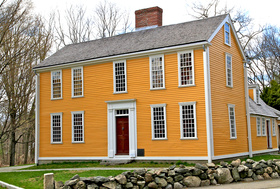 Completed in 1737 by John Hancock's grandfather, Reverend John Hancock, the house is now a museum.

The only extant residence associated with John Hancock, this was his boyhood home. In 1744, after the death of his father, the 7-year-old boy came to live at this house with his grandfather until 1750 (after which he joined his uncle, Thomas Hancock, a wealthy Boston merchant, who adopted him.)

Succeeding Hancock as minister in 1752, the Reverend Jonas Clarke and his wife, who was a cousin to John Hancock, reared twelve children in the parsonage. As a supporter of the Patriot cause, Clarke encouraged revolutionaries to use his home as a meeting place and refuge.

On the night of 18 April 1775, patriot leaders Hancock and Samuel Adams were visiting there. Around midnight, after everyone had gone to bed, Paul Revere and later William Dawes, warning the countryside of the approach of British troops, galloped up and in formed the household. They also delivered the warning from Dr. Joseph Warren that Hancock and Adams would likely be arrested. After some deliberation, Revere and Dawes proceeded to Concord; Hancock and Adams fled north towards Woburn.

Restored to its 18th-century appearance, and very well maintained, the house is open to the public for guided tours.

Religion is very improperly made a political machine.