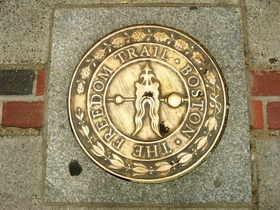 Freedom Trail marker, a stopping point along the brick-line path.

A walking tour of 16 sites in central Boston, with a couple in Charlestown, almost all related to the Revolution, that can be completed in a day, or enjoyed more fully, in two to three days.

1. Boston Common
Formerly a field for grazing cattle in the 1600s, used as a field for drill by militia in the 1770s, and now a public park.
2. Massachusetts State House
Built in 1798, on a cow pasture once owned by John Hancock, this state seat of government is a magnificent Federalist structure designed by Charles Bullfinch.
3. Park Street Church
Founded in 1809 and completed in 1810, Park Street Church was designed by Peter Banner. The 217 ft. steeple was once the first landmark travelers saw when approaching Boston.
4. Granary Burying Ground
Established in 1660, it contains some 1,600 graves including Samuel Adams, John Hancock, and James Otis, Jr.
5. King’s Chapel and Burying Ground
Completed by America’s first architect, Peter Harrison, in 1754. Kings Chapel magnificent interior is considered the finest example of Georgian church architecture in North America.
6. Boston Latin School Site and Ben Franklin Statue
Statue of Franklin and original site of Boston Latin School, founded 1635, and still in existence, but in a different location.
7. Old Corner Bookstore Building
Restored in 1960, the Old Corner Bookstore began as an apothecary shop built by Dr. Thomas Crease after the Great Fire of 1711 — on property that once belonged to Puritan dissident Anne Hutchinson.
8. Old South Meeting House
Built in 1729 as a meeting house for Puritan workship, the Old South Meeting House was the stage for some of the most dramatic events leading up to the American Revolution.
9. Old State House
Built in 1713, the Old State House was the seat of Massachusetts government in the 18th century. It is the oldest surviving public building in Boston and one of the most important public buildings still standing from the original 13 colonies.
10. Boston Massacre Site
A simple ring of stones marks the site of the Boston Massacre (5-Mar-1770) and reenactments take place on the anniversary every year.
11. Faneuil Hall
Peter Faneuil, a wealthy merchant, built Faneuil Hall as a center for commerce in 1742. Today it is still a place of business, but it is the second floor meeting hall — where Bostonians protested successively against the Sugar Act, the Stamp Act, the Townsend Acts, and the military occupation — that has the greater legacy.
12. Paul Revere House
Built in 1680, Paul Revere owned and lived in it from 1770 to 1818; restored to reflect its 17th century appearance.
13. Old North Church
The steeple was used to signal, by lantern, Paul Revere and colonists in Charlestown (“one if by land, two if by sea”). Also used by Thomas Gage during the Battle of Bunker Hill.
14. Copp’s Hill Burying Ground
Founded in 1659, Copp’s Hill Burying Ground — Boston’s largest burial ground — was the cemetery for merchants, artisans, and crafts people who lived in the North End.

15. U.S.S Constitution
The beautifully preserved USS Constitution, known as “Old Ironsides,” was launched in 1798 and is the oldest commissioned warship afloat in the world.
16. Bunker Hill Monument
With groundbreaking fifty years after the event of 17 June 1775, an obelisk commemorates the Battle of Bunker Hill and the fallen militia General Dr. Joseph Warren. A statue of Colonel William Prescott, one of the battle leaders, stands in front.

It would puzzle a Philadelphia lawyer.