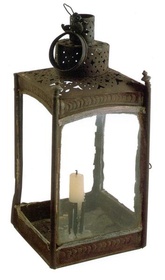 Lantern hung from the Old North Church
on the night of Paul Revere’s ride.

Recognized by curators, historians, and educators for more than a century, the Concord Museum displays Americana from the 17th through the 19th centuries.

The collection began around 1850 and was exhibited before the Civil War; only a handful of Americana collections can claim to be as old or as remarkably well-documented. It is especially strong in artifacts from Concord, with furnishings from Concord homes, including five period rooms and decorative arts. Its history galleries include Revolutionary War powder horns, muskets, cannonballs, and fifes.

The right of altering the government was a natural right, and not a right of government.