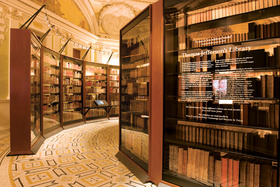 Established in 1800 to serve members of Congress, the collection of some 3,000 books was burned or pillaged by the British in August 1814, during the War of 1812. Within a month, Thomas Jefferson offered to donate his own books as a replacement. The following year, Jefferson sold his entire library of nearly 6,500 volumes, for $23,940, to Congress as the foundation for a new Congressional Library.

In 1851 a fire destroyed much of the Library of Congress collection, including two-thirds of the books from Jefferson's donation 35 years before.

The remaining Jefferson books have been conserved, many have been restored or are under restoration.

Guided and self-guided tours available, including a recreation of Jefferson’s library in the Thomas Jefferson Building.

The Federalists of the 1780s had a glimpse of what America was to become — a scrambling business society dominated by the pecuniary interests of ordinary people — and they did not like what they saw. This premonition of America’s future lay behind their sense of crisis and their horrified hyperbolic rhetoric. The wholesale pursuits of private interest and private luxury were, they thought, undermining America’s capacity for republican government. They designed the Constitution in order to save American republicanism from the deadly effects of the private pursuits of happiness.

Should the States reject this excellent Constitution, the probability is, an opportunity will never again offer to cancel another in peace — the next will be drawn in blood.