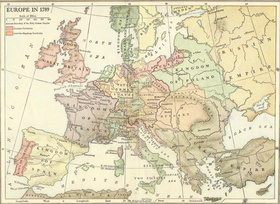 The 27 years during which America awakened to its need for independence — debated it, declared it, struggled for it, and ratified and effected its Constitution — were bookended by the end of one global conflict and the beginning of another.

In Europe the 1763 Peace of Paris concluded the Seven Years War, sometimes called the first true world war. It was a conflict that involved all of the major European countries, and once again pitted Great Britain against France for global dominance. In 1789, with the storming of the Bastille, the French Revolution began — influenced by the American Revolution, but begun for lack of bread. It would lead to mass executions of its own people, the rise of Napoleon to general and emperor, millions killed elsewhere, and once more a face-off between France and Britain.

Captain James Cook made three historic voyages to locations that no European had seen. The first voyage (1768—71) is shown in red; the second voyage (1772—75) in green; the third voyage (1776—79) in blue. The route of Cook’s crew following his death is shown as a dashed blue line.

Serving God is doing good to man, but praying is thought an easier service and therefore is more generally chosen.