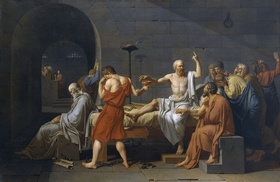 This historical painting by the great neo-classical French painter Jacques-Louis David typifies the Enlightenment. In an aesthetic of proportion and balance Socrates is asking the great question — Is there anything after death? — which he pursues with an equanimity belying the situation. Yet for his weeping comrades, there is no denying that something is indeed ending.

The 27 years when America awakened to its need for independence — debated it, declared it, struggled for it, and ratified and effected its Constitution — were bookended by the end of one global conflict and the beginning of another.

In Europe the 1763 Peace of Paris concluded the Seven Years War, sometimes called the first true world war. It was a conflict that involved all of the major European countries, and once again pitted Great Britain against France for global dominance. In 1789, with the storming of the Bastille, the French Revolution began — influenced by the American Revolution, but begun for lack of bread. It would lead to mass executions of its own people, the rise of Napoleon to general and emperor, millions killed elsewhere, and once more a face-off between France and Britain.

This was a time of Enlightenment, where intellectuals wanted reason to overcome superstition and revolutionize philosophy, science, and the arts. It was a time of exploration, with the adventurous Captain James Cook making three global voyages and discovering places no European had ever seen. Edward Gibbon explored the past, and during this time he spent 15 years completing The Decline and Fall of the Roman Empire, one of the great historical and literary achievements.

In the same year that the colonies declared their independence, Adam Smith in 1776 published The Wealth of Nations. In it he argued for the kind of free market economy that would eventually be typified in the United States. In music, Franz Joseph Haydn invented the string quartet, evolved the symphony (writing over 100 of them) and influenced Mozart and Beethoven. Nearly everything Wolfgang Mozart composed was written during this period, including his two great operas The Marriage of Figaro and Don Giovanni, which were musically as well as intellectually revolutionary. (Figaro, by the way, was based on a play by Pierre Beaumarchais, who was deeply involved in exporting armaments to the American revolutionaries.) And Ludwig van Beethoven? His contributions to music were just beginning with the publication of his first three piano sonatas.

The age of the French philosophes — Enlightenment Intellectuals — came to an end with the deaths of François-Marie Arouet — Voltaire (d. 1778), Jean Jacques Rousseau (d. 1778), and Denis Diderot (d. 1784). They challenged traditional thought and up-ended traditional mores. Diderot was the chief editor of the great Encyclopédie, which was unusual for including articles on the mechanical arts, but it also codified Enlightenment thought. Rousseau was important for his works on education, political science, and for his influence on Romanticism. Voltaire was embraced by the aristocracy and challenged it simultaneously. His most famous work today, Candide, called into question a core religious idea: God’s involvement in the world.

The English empirical philosopher, David Hume, died in the same year as the American Declaration of Independence was born. His insights on induction and causation liberated Immanual Kant by waking him from his self-described dogmatic slumber. What Hume had proposed seemed insoluble. But Kant responded with the Critique of Pure Reason, one of the greatest works on epistemology, answering — How do we know what we know?

In London, the Age of Johnson continued. In 1764 Samuel Johnson, Edmund Burke, Oliver Goldsmith, Joshua Reynolds, and others founded The Club, whose members sought to entertain each other with their knowledgeable and sparkling conversation over dinner. With members including Adam Smith, Edward Gibbon, David Garrick, and James Boswell, it was an opportunity for writers, politicians, an artist, and an actor to banter, to argue, and to discuss the issues of the day.

In Germany, young Johann Wolfgang von Goethe gained world-wide fame for his Sorrows of Young Werther (1774), making him an international celebrity and influencing the later Romantic movement in Europe. Faust would come much later, but Goethe was a polymath who began to make major contributions in poetry, drama, philosophy, and science.

Throughout Europe, rule was by monarchy, with the exception of the tiny Dutch Republic established in 1581. Sovereigns were great. Frederick the Great was King of Prussia during the American Revolution. Catherine the Great was Empress of Russia. And in the countries to have the biggest impact on the American colonies, two young men ruled: King George III was 25 in 1763, and King of England from the age of 22; Louis XVI was not even 20 when he ascended to the French throne in 1774. The first would loose an empire, the second his country — and then his head.

The Continental soldier often had to provide his own eating utensils, but on occasion they came as standard issue. Maryland troops, for example, were provided a wooden trencher (plate), and bowl, as well as wooden and pewter spoons. Each man would have his knife, of course; and for quaffing his rum, cider, beer, or whiskey, a horn cup, which was extremely light compared with pewter or ceramic. Officers, as might be expected, had more refined utensils. George Washington’s mess kit, for example, was a very elaborate affair housed in a handsome fourteen-compartment wood chest lined with green wool.

Our new Constitution is now established, and has an appearance that promises permanency; but in this world nothing can be said to be certain, except death and taxes.