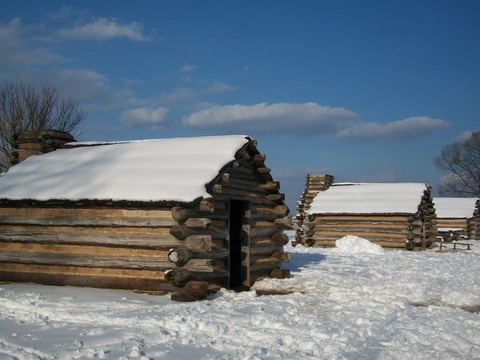 This cabin, one of several, is a recreation of the cabins the soldiers built during the winter of 1777—78.

The unattractive truth was that the arrival of the provisional treaty ending the war in April 1783 made the Continental Army superfluous, and the sooner it disappeared, the better. Congress eventually voted to provide full pay for five years for officers in lieu of half pay for life, but doing so was a purely rhetorical exercise, since there was no money in the federal coffers to pay anyone. Even that meaningless commitment generated widespread criticism, especially in New England, where returning officers were greeted with newspaper editorials describing them as blood-beaked vultures feeding at the public trough. At least in retrospect, the dissolution of the Continental Army in the spring of 1783 was one of the most poignant scenes in American history, as the men who had stayed the course and won the war were ushered off without pay, with paper pensions and only grudging recognition of their service.