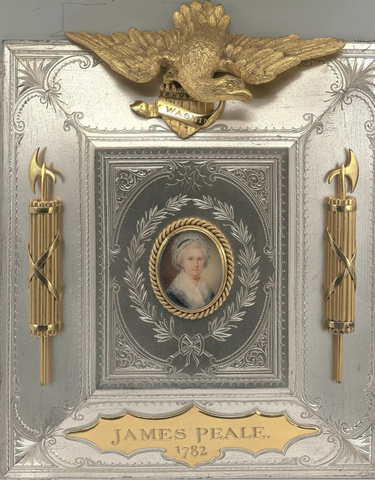 Probably reframed either in 1876, for the nation's centennial, or in 1889, for the centennial of Washington’s inauguration

Lafayette’s years in America had given him the most glorious career it was possible for a youth of his disposition to imagine. He had fought for a noble cause, and won the love of a nation. George Washington sent him admiring and heart-sore letters after the marquis returned to France; the state of Virginia presented a bust of him to the city of Paris; the island of Nantucket sent him a 500-pound cheese. Lafayette cherished the love he had earned overseas, and never let the French forget it. When his first two children were born, he named the boy George Washington and the girl Virginia. At his Paris household, his family spoke English, and his messenger was dressed as an American Indian.

Political contests are necessary sometimes, as well as military, to afford exercise and practice, and to instruct in the art of defending liberty and property.

Senate achieves a quorum and elects its officers in Federal Hall, New York.