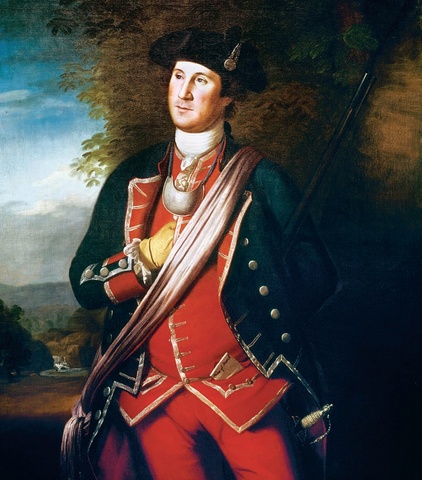 This portrait, commissioned by George Washington and painted by Peale at Mount Vernon, is the only authenticated pre-Revolution portrait we of the man. It depicts him ten years later in the uniform he wore while commander of the 1st Virginia Regiment (1754 – 62). Sticking out of his vest pocket is a paper inscribed Order of March.

On 21-May-1772 Washington wrote to Jonathan Boucher in Annapolis, Maryland, who had recommended Peale: I am now contrary to all expectation under the hands of Mr. Peale; but in so grave — and so sullen a mood — and now and then under the influence of Morpheus when some critical strokes are making, that I fancy the skill of this gentleman’s pencil will be hard put to it, in describing to the world what manner of man I am.