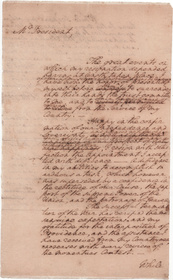 First side of the final draft of
Washington’s Resignation Speech

The great events on which my resignation depended, having at length taken place, I have now the honor of offering my sincere congratulations to Congress & of presenting myself before Congress them, to surrender into their hands the trust committed to me, and to claim the indulgence of retiring request permission to retire from the service of my country.
Happy in the confirmation of our independence and sovereignty, and pleased with the opportunity afforded the United States, of becoming a respectable Nation as well as in the contemplation of our prospect of National happiness, I resign with satisfaction the appointment I accepted with diffidence — a diffidence in my abilities to accomplish so arduous a task, which however was superseded by a confidence in the rectitude of our Cause, the support of the supreme Power of the Union, and the patronage of Heaven.
The successful termination of the War has verified the most sanguine expectations — and my gratitude for the interposition of Providence, and the assistance I have received from my Countrymen, increases with every review of the momentous Contest.
While I repeat my obligations to the army in general, I should do injustice to my own feelings not to acknowledge in this place the peculiar services and distinguished merits of the Gentlemen who have been attached to my person during the war. — It was impossible the choice of confidential officers to compose my family should have been more fortunate. — Permit me Sir, to recommend in particular those, who have continued in service to the present moment, as worthy of the favorable notice & patronage of Congress. —
I consider it an indispensable duty duty to close this last solemn act of my Official life, by commending the Interests of our dearest Country to the protection of Almighty God, and those who have the superintendance direction of them, to his holy keeping. —
Having now finished the work assigned me, I retire from the great theatre of action, — and bidding an affectionate a final farewell to this August body, under whose orders I have so long acted, I here offer today deliver? my Commission, and take my ultimate leave of all the employments of public life.

Mr. Jefferson had not the spirit of martyrdom. He would have introduced a flaming denunciation of slavery into the Declaration of Independence, but the discretion of his colleagues struck it out.