A Memorial and Remonstrance 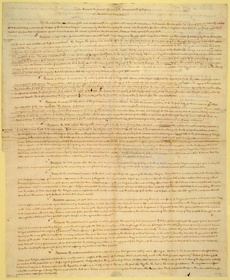 First manuscript page of A Memorial and Remonstrance by James Madison

In a letter 41 year later (14 July 1826) to George Mason, son of founding father George Mason, James Madison explains the circumstances behind the writing of Memorial and Remonstrance:

During the session of the General Assembly 1784–5 a bill was introduced into the House of Delegates providing for the legal support of Teachers of the Christian Religion, and being patronized by the most popular talents in the House, seemed likely to obtain a majority of votes. In order to arrest its progress it was insisted with success that the bill should be postponed till the evening session, and in the meantime be printed for public consideration. That the sense of the people might be the better called forth, your highly distinguished ancestor Col. Geo. Mason, Col. Geo. Nicholas also possessing much public weight and some others thought it advisable that a remonstrance against the bill should be prepared for general circulation and signature and imposed on me the task of drawing up such a paper. The draught having received their sanction, a large number of printed copies were distributed, and so extensively signed by the people of every religious denomination that at the ensuing session the projected measure was entirely frustrated; and under the influence of the public sentiment thus manifested the celebrated bill Establishing Religious Freedom enacted into a permanent barrier against Future attempts on the rights of conscience as declared in the Great Charter prefixed to the Constitution of the State.

I hope, some day or another, we shall become a storehouse and granary for the world.