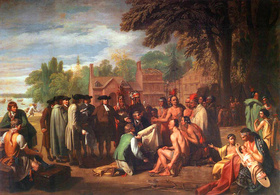 — Charter of Privileges Granted by William Penn, esq. to the Inhabitants of Pennsylvania and Territories, 28 October 1701

{ENDORSED} This Charter of Privileges being Distinctly read in Assembly & the whole & Every part thereof being Approved of and Agreed to by us. Wee do Thankfully receive the Same from our proprietary & Governour At Philadelphia this Twenty Eighth day of October 1701.

Signed on behalf and by order of the Assembly per Jos: Growdon Speaker.