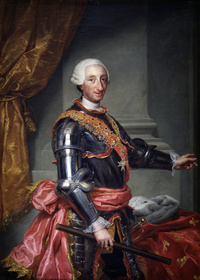 Charles III, King of Spain, was born in Madrid on 20 January 1716. He was the first son from the second marriage of Philip V with Elizabeth Farnese of Parma. At the age of sixteen he had the good fortune to be sent to rule as Duke of Parma (by right of his mother), where he came under more intelligent influences than he would have found in Spain.

In 1734, by dint of arms, he made himself master of Naples and Sicily. But really, Charles had no taste for the military; he seldom wore uniform and, only with difficulty could he be persuaded to witness a review. The peremptory action of the British admiral commanding in the Mediterranean at the approach of the War of the Austrian Succession, who forced him to promise to observe neutrality under a threat to bombard Naples, made a deep impression on his mind. It gave him a feeling of hostility to England which ever after influenced his policy.

As King of the Two Sicilies, Charles began the work of internal reform which he afterwards continued in Spain. Foreign ministers who dealt with him agreed that he had no great natural ability, but he was honestly desirous to do his duty as king, and he showed good judgment in his choice of ministers. Bernado Tanucci, the chief minister in Naples, had considerable influence over him.

On the death of his half-brother, Ferdinand VI, he became king of Spain. Whereupon he resigned the Two Sicilies to his third son, Ferdinand.

As King of Spain, Charles’s foreign policy was disastrous. His strong family feeling, and his detestation of England, led him into the Pacte de Famille — Family Compact — with France. Spain became entangled in the close of the Seven Years’ War (known in America as the French-Indian War), to her great loss. In 1770, he almost ran into another war over the barren Falkland Islands. In 1779 he was, somewhat reluctantly, led to join France and the American colonists in the war against Britain, though he well knew that the independence of the English colonies would have a ruinous influence on his own American dominions. For his army he did practically nothing; for his fleet very little except to build fine ships without taking measures to train officers and men.

By and large, however, the internal government of King Charles was beneficial to Spain, and it implemented many reforms. The Spanish Army and Navy were reorganized despite the losses from the Seven Years’ War. He compelled the people of Madrid to stop emptying their slops out of the windows. (When they objected, he said that they were like children who cried when their faces were washed.) In 1766, his attempt to force the Madrileños to adopt French dress led to a riot. He did not display any personal courage; and for a long time after he remained at Aranjuez, leaving the government in the hands of his minister, the Count of Aranda.

Charles was deeply offended by the real or suspected involvement of the Jesuits in causing the riot of 1766. He therefore consented to the expulsion of the order. Known as the Pragmatic Penalty of 1767, the Jesuits were expelled from Spain and all their possessions were confiscated. His quarrel with the Jesuits and the recollection of disputes he had with the pope when he was King of Naples, turned him towards a general policy of trying to restrict the overgrown power of the Church. The number of the idle clergy, and more particularly of the monastic orders, was reduced. The Inquisition, though not abolished, was rendered inert.

In the meantime, much antiquated legislation which tended to restrict trade and industry was abolished; roads, canals and drainage works were carried out. Though many of his paternal ventures led to little more than waste of money, or the creation of hotbeds of jobbery, on the whole, the country prospered. The result was largely due to the King, who, even when ill-advised, worked at his task of government.

His example was not without effect on at least some of the nobles.

King Charles died, prior to the French Revolution, on 14 December 1788— with a reputation as a philanthropic and philosophic king. Nevertheless, he was a despot who reigned as an enlightened absolute monarch. He was also a sincere Roman Catholic. Despite his hostility to the Jesuits, his dislike of friars in general, and his jealousy of the power of the Inquisition, he zealously endeavored to persuade the pope to proclaim the Immaculate Conception a dogma necessary to salvation.

In his domestic life, Charles was regular and was a considerate master — though he had a somewhat caustic tongue and took a rather cynical view of mankind. He was passionately fond of hunting.

In a land where horsemanship was often men’s touchiest point of pride, Jefferson had to admit he never saw Washington’s like for grace and control in the saddle. A froniter runner and Indian wrestler — his friend George Mercer described his frame as padded with well-developed muscles — Washington had by 1774 refined mere energy down to a grace of least movement, the higher athleticism of the dance. And he danced well.