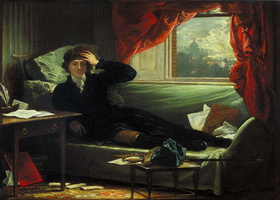 Portrait of Kosciuszko by Benjamin West, 1797

For all their talk of reason and enlightenment, Washington and the other leading Founders were more religious than they sometimes seem. Most of them had no quarrel with religion as long as it was reasonable and orderly. Washington was a member of his Anglican, later Episcopal, church vestry, and he remained a frequent churchgoer — though unlike his wife, Martha, he never became a member of his church, meaning that he did not partake of the Eucharist on communion Sundays. Washington, the perfect Freemason, considered himself enlightened in religious matters (being no bigot myself to any mode of worship), and he almost never knelt in prayer and seems never to have purchased a bible.

The General Assembly of Rhode Island authorizes enlistment of slaves.

Richard Stockton, U.S. attorney and signer of Declaration of Independence for New Jersey, dies at age 50.