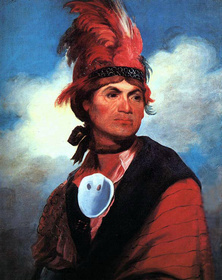 QUICK FACTS
BORN:
1743 in Ohio Country near the Cuyahoga River
DIED:
24 November 1807 in his house (in what is now Burlington, Ontario)

Joseph Brant, American Indian Chief of the Mohawk tribe, known also by his Indian name, Thayendanegea, was born on the banks of the Ohio river in 1742. In early youth he attracted the attention of Sir William Johnson, who sent him to be educated by Dr. Eleazar Wheelock at Lebanon, Connecticut, in Moor’s Indian Charity School, in which Dartmouth College had its origin.

He took part, on the side of the English, in the French and Indian War, and in 1763 fought with the Iroquois against Chief Pontiac. Subsequently he settled at Canajoharie, or Upper Mohawk Castle (in what is now Montgomery county, New York), where, as a devout churchman, he devoted himself to missionary work, and translated the Anglican catechism and St. Mark’s Gospel into the Mohawk tongue (1787). When Guy Johnson (1740 – 88) succeeded his uncle, Sir William, as superintendent of Indian affairs in 1774, Brant became his secretary. At the outbreak of the Revolutionary War he remained loyal, was commissioned colonel, and organized and led the Mohawks and other Indians allied to the British against the settlements on the New York frontier. He took part in the Cherry Valley Massacre, in the attack on Minisink and the expedition of General St. Leger which resulted in the Battle of Oriskany on 6 August 1777. After the war he discouraged the continuance of Indian warfare on the frontier, and aided the commissioners of the United States in securing treaties of peace with the Miamis and other western tribes. Settling in Upper Canada he again devoted himself to missionary work and in 1786 visited England, where he raised funds with which was erected the first Episcopal church in Upper Canada. His character was a peculiar compound of the traits of an Indian warrior — with few rivals for daring leadership — and of a civilized politician and diplomat of the more conservative type. He died on an estate granted him by the British government on the banks of Lake Ontario on 24 November 1807. A monument was erected to his memory at Brantford (named in his honour), Ontario, Canada in 1886.

But with the British army evacuated [from Philadelphia in 1778] and the Patriots now in charge, Philadelphia Loyalists were doubly vulnerable to censure and punishment for siding with the Crown and for having consorted with the enemy. The Philadelphia Assembly Appointed [Charles Willson] Peale and four others to be Commissioners of Forfeited Estates, and for that the commissioners would receive a 5 percent commission. Peale’s group had extraordinary power to interrogate suspected traitors, break into houses, remove property, and sell off estates. Writs were issued to seize 118 estates ...

— Paul Staiti
Of Arms and Artists: The American Revolution Through Painter’s Eyes (2016)

When a man assumes a public trust, he should consider himself as public property.