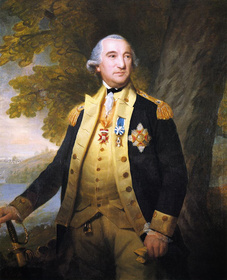 Friedrich Wilhelm August Heinrich Ferdinand von Steuben, German-born soldier, was born at Magdeburg, Prussia, in 1730, the son of William Augustine Steuben (1699 – 1783), also a soldier. At fourteen he served as a volunteer in a campaign of the Austrian Succession War. He became a lieutenant in 1753, fought in the Seven Years’ War, was made Adjutant General of the free corps in 1754; but he re-entered the regular army in 1761, and became an aide to Frederick the Great in 1762.

Leaving the army after the war, he was made Canon of the Cathedral of Havelberg, and subsequently was Grand Marshal to the prince of Hohenzollern-Hechingen. In 1777 his friend, the Count St. Germain, then the French minister of war, persuaded him to go to the assistance of the American colonists, who needed discipline and instruction in military tactics.

Carrying a letter from Benjamin Franklin introducing him to George Washington, Steuben arrived at Portsmouth, New Hampshire, on 1 December 1777 and offered his services to Congress as a volunteer in the Continental Army. In March 1778 he began drilling the irregularly experienced soldiers at Valley Forge. By May, when he was made Inspector General, with the rank of Major General, he had established a thorough system of discipline and economy by first training a model company of soldiers who then trained others.

Results of Steuben’s efforts were shown in the next campaign, the Battle of Monmouth (28-Jun-1778), where he rallied the disordered and retreating troops of General Charles Lee.

During the winter of 1778 - 79, General von Steuben wrote his Blue Book, published as Regulations for the Order and Discipline of the Troops of the United States. As he completed drafts, Washington went through them line by line, and passed them to Generals Stirling and Arthur St. Clair for comment. They recommended only very minor changes. Published in 1779, the Blue Book served as the American Army’s regulatory bible until the War of 1812.

Steuben was a member of the court-martial which tried and hung Major John André in 1780. After General Horatio Gates’ defeat at Camden he was placed in command of the district of Virginia with special instructions to collect, organize, discipline and expedite the recruits for the Southern army. In April 1781 he was superseded in command of Virginia by Marquis de Lafayette; in the fall he took part in the Siege of Yorktown.

For his service, the states of New York, Virginia, Pennsylvania, and New Jersey gave Baron von Steuben grants of land. Congress passed a vote of thanks and gave him a gold-hilt sword in 1784 and later granted him a pension of $2400.

Baron von Steuben retired from the army after the war and passed the last years of his life at Steubenville, New York, where he died in 1794.

Perhaps the most important element in Washington’s military education during the French and Indian War was his development of a strategic sense. The struggle for the Forks of the Ohio had started as a Virginia affair, but it quickly took on an international prominence. Washington became one of the men at the center of the conflict. Although he had a limited understanding of the European politics and diplomacy that helped to fuel the war, he nevertheless sensed the crucial importance of Indian affairs. He also perceived the strategic value of the different regions of North America — such as the Middle Atlantic, the Ohio, and the Hudson Valley — and learned how British ministers thought of conquering or defending a continent. Most of all, he learned how war could become a battleground for the competing ambitions and interests of the various colonies.

I believe that justice is instinct and innate, that the moral sense is as much a part of our constitution as that of feeling, seeing, or hearing.