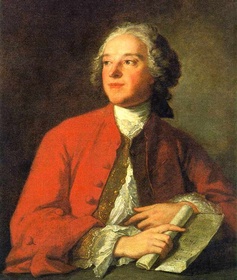 Pierre-Augustin Caron de Baumarchais — courtier, speculator, spy, gunrunner for the American Revolution, and French playwright — was born in Paris in 1732. His father, a watchmaker named Caron, brought him up to pursue the same trade. He was an unusually precocious and lively boy, shrewd, sagacious, passionately fond of music, and imbued with a strong desire for rising in the world.

At the age of 21 he invented a new escapement for watches that allowed them to be more accurate as well as more compact. When this was pirated by the royal watchmaker, young Caron at once published his grievance in the gazette Mercure de France and had the matter referred to the Academy of Sciences, which decided in his favor. This affair brought him to notice at court; he was appointed (or at least called himself) watchmaker to King Louis XV, who ordered from him a watch similar to one he had made for Madame de Pompadour.

His handsome figure and cool assurance enabled him to make his way at court. Madeleine-Catherine Franquet, the wife of an old court official, persuaded her husband to make his office over to young Caron, and, on her husband’s death a few months later, married the handsome watchmaker. Caron assumed the name de Beaumarchais; four years later, by purchasing the office of secretary to the King, he obtained a patent of nobility.

Meanwhile his wife died within the first year of their marriage and he next married the widow Madame Leveque in 1768. After she died in 1771, rumors rose that Beaumarchais was using poison to acquire his wives’ estates — though this was never confirmed. Certainly he was a young man aspiring.

At court his musical talents were recognized and he was appointed to teach the King’s four daughters the harp. This position enabled him to confer a slight favor on the great banker Joseph Duverney, who testified his gratitude by giving Beaumarchais a share in his many speculations. Beaumarchais seized the opportunity and soon realized a handsome fortune.

When Duverney died in 1770, the banker left him 15,000 francs. This was contested by Duverney’s sole heir, and a decade’s worth of court battles ensued. Ultimately the finding was against Beaumarchais and on 26 February 1774 he received a sentence of au blame — the loss of his civil rights.

The King’s Secret Service & Aid to the Americans

Following the court ruling, Beaumarchais worked to restore his full civil rights by joining the King’s secret service. One of his missions was to England to destroy the Memoires secrets d’une femme publique in which Charles Theveneau de Morande made an attack on Madame Du Barry, who had been mistress to King Louis XV. Beaumarchais secured this pamphlet and burnt the whole impression in London.

Another expedition, to England and Holland to seize a pamphlet attacking Marie Antoinette, led to a series of incidents more amazing than intrigues in Beaumarchais’s own plays (though his own account must be received with caution). Beaumarchais pursued the libeler to Germany and overtook him in a wood near Neustadt. After a struggle he gained possession of the document, then was attacked by brigands. But when the wound he received was proved to be self-inflicted, he was imprisoned for some time in Vienna, and only released by the Austrian government after an explanation from Paris.

It was from his visits to England that Beaumarchais became interested in the impending struggle between the British colonies in North America and the mother country. His sympathies were entirely with the former. By his unwearied exertions he succeeded in inducing the French government — even before it entered the war in 1778 — to give assistance to the Americans. Partly on his own account, but chiefly as the agent of the French and Spanish governments, Beaumarchais fabricated a business called Rodrigue Hortalez et Cie that employed a fleet of forty vessels. It secretly trafficked with the insurgents to provide them with money, arms, uniforms, and other provisions — nearly all of which was never paid back.

Beaumarchais made his first foray as a playwright with the sentimental drama Eugenie (1767) followed by Les Deux Amis two years later. Though he made a name for himself, neither play had more than moderate success.

The next two plays, comedies that ridiculed the aristocracy, gained for Beaumarchais the lasting fame for which he is remembered. The earlier, Le Barbier de Seville, after a prohibition of two years, was put on the stage in 1775 and was at first a complete failure. Beaumarchais had overloaded the last scene with allusions to facts of his own case and the whole action of the piece was labored and heavy. But he cut down and remodeled the play in time for a second staging and it was a complete success.

The intrigues necessary to obtain a license for the second and more famous comedy, Le Mariage de Figaro, are highly amusing, and throw much light on the unsettled state of public sentiment at the time. Though completed in 1778, King Louis XVI saw its dangerous tendencies and his opposition was not overcome until 1784. It became an unprecedented success — assisted through the self-advertising that Beaumarchais understood so well.

The principal character in both plays, Figaro, is a completely original conception. Beaumarchais drew a portrait of himself in the resourceful adventurer, who combined wit, shrewdness, gaiety, and philosophic reflection. For an English audience, the Figaro plays are generally known through the adaptations of them in the operas of Mozart and Rossini; but in France they long retained popularity as theatrical comedies. (The final play in the Figaro trilogy, and Beaumarchais’s last play, La Mère coupable, premiered in 1792. Though popular — and like the others later turned into an opera — it is now largely unknown.)

When Voltaire died in 1778, Beaumarchais succeeded in buying the rights to most of the French Philosophe’s many manuscripts. He then bought the entire foundry of the famous English type designer John Baskerville from his widow, purchased three paper mills, and between 1783 and 1790 published a 70-volume edition of Voltaire’s works. Though a disaster financially, Beaumarchais single-handedly preserved many later Voltaire works which might have been lost.

Following the outbreak of the French Revolution in 1789, a speculation to supply the Convention Nationale with muskets from Holland proved a ruinous failure. He was accused of concealing arms and corn in his house — but when it was searched nothing was discovered but thousands of copies of his edition of Voltaire, which he had published in Germany to avoid the French censors. He was charged with treason to the Republic and was imprisoned for a week before he fled to Holland and England.

Although he was hunted as an agent of the Convention in Holland and England, while in Paris he was proscribed as an emigre, his courage and happy disposition never deserted him. He returned to Paris in 1796, and died there suddenly in 1799 at the age of 67.

By his writings Beaumarchais contributed greatly, though quite unconsciously, to hurry on the events that led to the French Revolution. At heart, he hardly seems to have been a republican, and the Revolution did not benefit him. The astonishing thing is that the society he travestied in Le Mariage de Figaro was the most passionate in its applause. Characterized by Napoleon as the revolution already in action, — the court enjoyed the skewering of the aristocracy without a clue as to its real meaning.

All the tranquility, the happiness & security of mankind rest on justice, on the obligation to respect the rights of others.