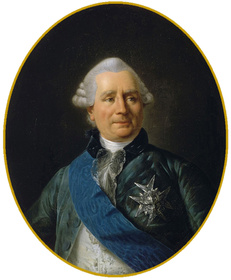 He was introduced to the profession of diplomacy by his uncle, M. de Chavigny, under whom he saw his first service at Lisbon. His successful conduct of French interests at the court of Trier in 1750 and the following years led to his being sent to Constantinople in 1755 at first as minister plenipotentiary, then as ambassador. In 1768 he was recalled, ostensibly because of a misalliance with Mme. Testa, widow of a Pera surgeon, but really because the duc de Choiseul, then Foreign Minister, thought him not zealous enough in provoking a quarrel between Russia and Turkey. After Choiseul’s death he was sent to Stockholm with instructions to help the aristocratic party of the Hats with advice and money.

The revolution by which Gustavus III (19 August 1772) secured for himself the reality, instead of the shadow, of power was a great diplomatic triumph for France. With the accession of Louis XVI Vergennes became foreign minister. His general policy was one of friendly relations with Austria, combined with limitations to Joseph II’s ambitious designs, the protection of Turkey, and opposition at all points to England.

His hatred of England and his desire to avenge the disasters of the Seven Years’ War led to his support of the American States in the Revolutionary War (a step which ultimately led to financial and political disaster for the French and to the Revolution of 1789). Vergennes sought by a series of negotiations to secure the armed neutrality of the Northern powers, eventually carried out by Catherine II; he ceded to the demands of the playwright and revolutionary Beaumarchais that France should secretly provide the Americans with arms and volunteers. In 1777 he informed the American commissioners — Benjamin Franklin, Arthur Lee, and John Adams — that France acknowledged the Republic and was willing to form an offensive and defensive alliance with it; the Treaty of Alliance was signed 6 February 1778.

In domestic affairs Vergennes belonged to the old school. He intrigued against Jacques Necker, the Director-General of Finance, whom he regarded as a dangerous innovator, a republican, a foreigner and a Protestant. In 1781 he became chief of the Council of Finance, and in 1783 he supported the nomination of Charles-Alexandre de Calonne as Controller-General.

Vergennes died in 1787, before the meeting of the Assembly of Notables, which he is said to have suggested to Louis XVI.

After the coolest reflections on the matter, this must be allowed, that Britain was too jealous of America, to govern it justly; too ignorant of it, to govern it well; and too distant from it to govern it at all.