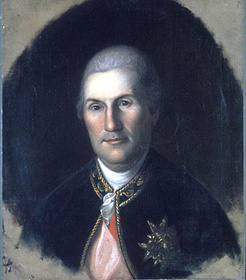 Jean Baptiste Donatien de Vimeur Rochambeau — Comte de Rochambeau — a French soldier who helped win the American Revolution, was born at Vendôme (Loir-et-Cher) on 1 July 1725. He was originally destined for the church and was brought up at the Jesuit college at Blois, but after the death of his elder brother he entered a cavalry regiment, served in Bohemia and Bavaria and on the Rhine; and in 1747 he attained the rank of colonel.

Rochambeau took part in the Siege of Maestricht in 1748, became governor of Vendôme in 1749, and after distinguishing himself in 1756 in the Minorca expedition, was promoted to Brigadier of Infantry. In 1757 and 1758 he fought in Germany, notably at Krefeld and Clostercamp, where he received several wounds. He was appointed maréchal de camp in 1761 as well as inspector of cavalry — and was frequently consulted by the ministers on technical points.

In 1780, with the rank of Lieutenant General, Rochambeau was sent in command of 6,000 French troops to help General Washington and the Continental Army in their fight against the British.

He landed at Newport, Rhode Island, on 10 July; but he was held back for a year owing to his reluctance to abandon the French fleet, which was blockaded by the British in Narragansett Bay. Finally, in July 1781, Rochambeau’s troops were able to leave Rhode Island and marched across Connecticut where they joined Washington at the Hudson. Then followed the celebrated march of the combined forces to Yorktown, where, on 22 September, they joined the troops of Marquis de Lafayette. Following a three-week siege, British General Cornwallis was forced to surrender on the 19 October.

Throughout, Rochambeau had displayed an admirable spirit, placing himself entirely under Washington's command and handling his own troops as part of the American army. In recognition of his services, Congress voted him and his troops the thanks of the nation and presented him with two cannons taken from the British. On his return to France, he was loaded with favors by King Louis XVI and was made Governor of Picardy.

During the French Revolution he commanded the Army of the North in 1790 — but resigned in 1792. He was arrested during the Terror, and narrowly escaped the guillotine. He was subsequently pensioned by Napoleon Bonaparte. He died at Thoré (Loire-et-Cher) on the 10 May 1807.

A statue of Rochambeau by Ferdinand Hamar was unveiled by President Roosevelt on 24 May 1902. A gift from France to the United States, it is one of four statues — of Europeans who aided the American cause — that stands in Lafayette Square, Washington, DC.

The French years provided Franklin’s detractors precisely what they needed: proof that the ur-American was un-American. Franklin was the Founding Father who had come the furthest, which makes him today the most compelling; he was also the Founding Father who traveled the farthest, which in his own century made him the most suspect. Few other homes in Philadelphia sported both Réaumur and Fahrenheit thermometers. The story goes that when Franklin proposed that Congress open its meetings with a prayer, Alexander Hamilton quipped that that body had no need of foreign aid. The story may be apocryphal but the sentiment was real. The expatriate patriot, Franklin was associated in many minds with the dependent chapter of American independence, one better expunged from the record.

Government is instituted to protect property of every sort.... This being the end of government, that alone is a just government, which impartially secures to every man, whatever is his own.