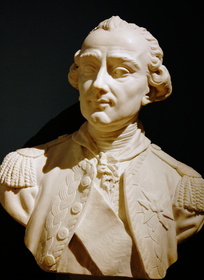 Jean Baptiste Charles Henri Hector, comte d’Estaing, French admiral, was born at the château of Ruvel, Auvergne, on 24 November 1729. He entered the army as a Colonel of Infantry, and in 1757, with the rank of Brigadier General, he accompanied comte de Lally to the East Indies.

He was made prisoner at the Siege of Madras In 1759 but was released on parole. Before the ratification of his exchange, he obtained command of some vessels and conducted various naval attacks against the English. On his return to France in 1760, he accidentally fell into their hands. Since he had broken his parole, d’Estaing was thrown into prison at Portsmouth — but the charge could not be properly substantiated, and he was soon after released.

In 1763 he was named Lieutenant General in the Navy and in 1777 Vice Admiral. In 1778, he obtained the command of a fleet intended to assist the American colonies in their revolt against Great Britain, and set sail on 13 April.

From 11—22 July his fleet blockaded General William Howe at Sandy Hook, and though greatly superior in force, did not venture to attack him. In concert with the American generals, he planned an attack on Newport, preparatory to which he compelled the British to destroy some war vessels that were in the harbor. Before the concerted attack could take place, however, he put to sea against the English fleet under Admiral Richard Howe. But a sudden violent storm compelled the two fleets to separate before engaging in battle; many of his vessels were so shattered that d’Estaing found it necessary to put into Boston for repairs.

He then sailed for the West Indies on 4 November.

After a feeble attempt to retake Santa Lucia from Admiral Barrington, he captured St. Vincent and Grenada. On 6 July 1779, he fought a drawn battle with Admiral John Byron, who then retired to St. Christopher. Though superior in force, d’Estaing would not attack the English in the roadstead, but set sail to attack at Savannah, which was occupied by the British.

Yet, all his attempts — as well as those of the Americans — against the town were repulsed with heavy losses and he was finally compelled to retire.

He was in command of the combined fleet before Cadiz when the peace was signed in 1783; but from that time his chief attention was devoted to politics. In 1787 he was elected to the Assembly of the Notables; in 1789 he was appointed Commandant of the National Guard; in 1792 he was chosen Admiral by the National Assembly.

Though in favor of national reform, he continued to cherish a strong loyalty to the royal family, and on the trial of Marie Antoinette in 1793, gave testimony in her favor. On this account, and because of certain friendly letters which had passed between him and the queen, he was himself brought to trial, and was executed on the 28 April 1794.

The Federalists of the 1780s had a glimpse of what America was to become — a scrambling business society dominated by the pecuniary interests of ordinary people — and they did not like what they saw. This premonition of America’s future lay behind their sense of crisis and their horrified hyperbolic rhetoric. The wholesale pursuits of private interest and private luxury were, they thought, undermining America’s capacity for republican government. They designed the Constitution in order to save American republicanism from the deadly effects of the private pursuits of happiness.