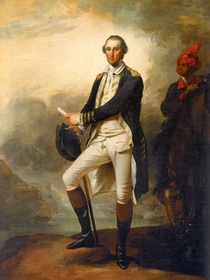 Portrait of Washington and Billy Lee by John Trumbull, 1780

Washington’s refusal to accept a salary for his services was emblematic of his somewhat ostentatious public virtue. He did open a public expense account, however, and some have claimed that he made money from it by overcharging Congress. In fact, the £150 per month that he requested for expenses was not just for him, but also for his entourage, which sometimes swelled to a crowd. His account books, which still exist, list charges for things like ferry fares, innkeepers’ fees, candlesticks, saddle repair, meat, fruit, mounds of cabbages and beets, and (admittedly) oceans of grog, liquor, and wine. Washington even charged Congress for fifteen shillings Cash paid a beggar by the General’s order. But although he was not averse to placing his headquarters in the occasional mansion, he otherwise made do with precious few luxuries.

It is not the public, but private interest, which influences the generality of mankind, nor can the Americans any longer boast an exception.