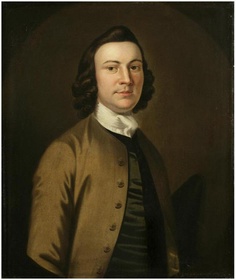 William Alexander, known as Lord Stirling, was a Continental Army general. Born in New York City in 1726, he was the son of James Alexander (1690 - 1756), at one time the surveyor general of New York and New Jersey and a noted colonial lawyer. He was well educated, and like his father he became an excellent mathematician and astronomer.

At the beginning of the French and Indian War, Alexander served first as commissary and then as aide-de-camp to Massachusetts colonial Governor William Shirley. In 1756 he accompanied Shirley to England, where he was persuaded to claim the earldom of Stirling. In 1759 an Edinburgh jury declared him to be the nearest heir to the last Earl of Stirling; the House of Lords, however, resolved that he had not proved his claim and forbade him to use the title.

Nevertheless, when Alexander returned to America in 1761 he adopted the title Lord Stirling. Settling at Basking Ridge, New Jersey, with his wife, Sarah Livingston Alexander (married 1748), he was a man of wealth and social prominence, had a fine mansion, was a member of the New Jersey Provincial Council, as well as surveyor general of the colony.

A strong advocate for the colonial cause at the outbreak of the Revolutionary War, in November 1775 he was appointed colonel of the first regiment of the New Jersey militia — outfitting the soldiers at his own expense. The following January he distinguished himself by the capture of an armed British transport in New York Bay. In March he became brigadier general, and for some time was in command at New York and supervised the fortifications of the city and harbor.

At the Battle of Long Island (Aug-1776), he held off the British troops long enough to enable Washington to evacuate the remainder of his forces. He was taken prisoner, but was soon afterward exchanged. In February 1777 he was appointed major general.

He participated in the battles of Trenton, Princeton, Brandywine, and Germantown; he especially distinguished himself at Monmouth. He took an active part in exposing the Conway Cabal, presided over the court-martial of General Charles Lee (Jul-1778), and to an unusual degree enjoyed the confidence of Washington. In October 1781 he took command of the northern department at Albany to check an expected invasion from Canada.

Often overindulging in food and drink, Lord Stirling died from gout at Albany in January 1783. Brave and intelligent, energetic yet cautious, he was good military engineer and organizer, and one of Washington’s best generals.

I may sometimes differ in opinion from some of my friends, from those whose views are as pure & sound as my own. I censure none, but do homage to every one's right of opinion.