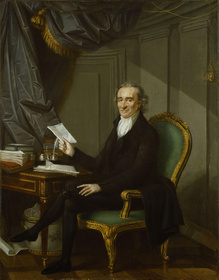 Thomas Paine — author, propagandist, political philosopher, and revolutionary — was born at Thetford, Norfolk, England in 1737, the son of a Quaker staymaker. After several years at sea and after trying various occupations on land, Paine took up his father's trade in London, where he supplemented his meager grammar school education by attending science lectures. He succeeded in 1762 in gaining an appointment in the excise, but was discharged for neglect of duty in 1765. Three years later, however, he received another appointment, at Lewes in Sussex. He took a vigorous share in the debates of a local Whig club, and in 1772 he wrote a pamphlet embodying the grievances of excisemen, supporting their demands for an increase in pay. In 1774 he was dismissed from the service for absence without leave — in order to escape his creditors.

A meeting with Benjamin Franklin in London was the turning point in his life. Franklin provided him with letters to his son-in-law, Richard Bache, and to other leaders in the American colonies. Paine sailed for America in 1774. Bache introduced him to Robert Aitkin, whose Pennsylvania Magazine he helped found and edited for eighteen months.

On 9 January 1776 Paine published a pamphlet entitled Common Sense, a telling array of arguments for separation from Britain and for the establishment of a republic. His argument was that independence was the only consistent line to pursue, that it must come to that some time or other; that it would only be more difficult the more it was delayed, and that independence was the surest road to union. Written in simple convincing language, Common Sense was read everywhere. The open movement to independence dates from its publication. Washington said that it worked a powerful change in the minds of many men. Leaders in the New York Provincial Congress considered the advisability of answering it, but came to the conclusion that it was unanswerable.

When war was declared, and fortune at first went against the colonists, Paine, who was then serving with General Greene as volunteer aide-de-camp, wrote the first of a series of influential tracts called The Crisis, of which the opening words, These are the times that try men’s souls, became a battle cry. Paine’s services were recognized by an appointment to be secretary of the commission sent by Congress to treat with the Indians, and a few months later to be secretary of the Congressional committee of foreign affairs. In 1779, however, he committed an indiscretion that brought him into trouble. He published information gained from his official position, and was compelled to resign. He was afterwards clerk of the Pennsylvania legislature, and accompanied John Laurens (the son of Henry Laurens) during his mission to France.

In 1787 he sailed for Europe with the model of an iron bridge he had designed. This was publicly exhibited in Paris and London, and attracted great crowds. In England he determined to open the eyes of the people to the madness and stupidity of the government. His first efforts in the Prospects on the Rubicon (1787) were directed against Pitt’s war policy, and towards securing friendly relations with France. When Edmund Burke’s Reflections on the Revolution in France appeared in 1790, Paine at once wrote his answer, Rights of Man. The first part appeared 13 March 1791; it had an enormous circulation before the government took alarm and endeavored to suppress it — thereby exciting intense curiosity to see it, even at the risk of heavy penalties.

Those who know the book only by hearsay as the work of a furious incendiary will be surprised at the dignity, force and temperance of the style; it was the circumstances that made it inflammatory. Pitt used to say, according to Lady Hester Stanhope, that Tom Paine was quite in the right, but then he would add, `What am I to do? As things are, if I were to encourage Tom Paine’s opinions we should have a bloody revolution.’

Following the publication of Rights of Man, Part the Second (Feb-1792), Paine was indicted for treason in May 1792, but before the trial came off he was elected by the department of Calais to the French convention, and escaped into France, followed by a sentence of outlawry.

The first years that Paine spent in France form a curious episode in his life. He was enthusiastically received, but since he knew very little French, translations of his speeches had to be read for him. He was bold enough to speak and vote for the detention of Louis XVI during the war and his perpetual banishment afterwards, and he pointed out that the execution of the King would alienate American sympathy. He incurred the suspicion of Robespierre, was thrown into prison, and escaped the guillotine by an accident. Before his arrest he had completed the first part of the Age of Reason, the publication of which made an instant change in his position, negatively, on both sides of the Atlantic.

More than two centuries later, The Age of Reason can be estimated calmly. It was written from the point of view of a Quaker who did not believe in revealed religion, but who held that all religions are in their nature mild and benign when not associated with political systems. Intermixed with the coarse unceremonious ridicule of what he considered superstition and bad faith are many passages of earnest and even lofty eloquence in favor of a pure morality founded on natural religion. In short, the work — including a second part, written during his ten months’ imprisonment and published after his release — represents the deism of the 18th century, though in the hands of a rough and passionate controversialist.

At the downfall of Robespierre, Paine was restored to his seat in the convention and served until October 1795, when it adjourned. In 1796 he published a long letter to Washington, attacking his military reputation and his presidential policy with inexcusable bitterness.

In 1802 Paine sailed for America, but while his services in behalf of the colonies were gratefully remembered, The Age of Reason and his attack on Washington had alienated many of his friends. He died in Greenwich Village, New York, in 1809, and was buried at his estate in New Rochelle on land that had been granted him by the State of New York for his services during the Revolution. However his body was removed to England in 1819 by English radical William Cobbett, who died without completing the monument that he intended, and the remains were lost (though the search for them continues to this day).

C. Vann Woodward has written of Jefferson, It fell to the lot of one Virginian to define America. It was in his private life that Jefferson defined the relationship between blacks and whites in America, acting out in the most specific sense the psychosexual dilemma of the whole nation. Other great men in history have loved unlettered women, among them Rousseau and Goethe, each of whom lived for years with virtually illiterate mistresses and then in the end married them. But Jefferson’s dilemma was peculiarly American. So savage were the penalties of this kind of love in the New World that he could neither admit it nor defend it without fear of social ostracism, and he had to keep up an elaborate pretense that it did not exist. He could not openly, and perhaps even privately admit his paternity to Sally’s children.

There is nothing so likely to produce peace as to be well prepared to meet an enemy.