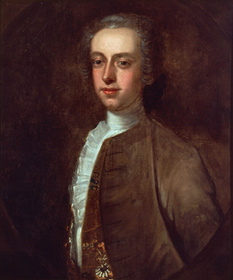 Thomas Hutchinson, son of a wealthy merchant and the last royal governor of the province of Massachusetts, was born in 1711. He graduated from Harvard in 1727 and then became an apprentice in his father’s counting room. For several years he devoted himself to business. In 1734 he married Margaret Sanford (1716 – 54), granddaughter of Governor Peleg Sanford of Rhode Island.

Hutchinson began a public career in 1737 as a member of the Boston Board of Selectmen. A few weeks later he was elected to the General Court of Massachusetts Bay where he was a member until 1740 and again from 1742 – 49, during which he served as speaker in 1747, 1748, and 1749. He consistently advocated for a sound financial system, and vigorously opposed the operations of the Land Bank and the issue of pernicious bills of credit. In 1748 he carried through the General Court a bill providing for the cancellation and redemption of the outstanding paper currency.

Hutchinson went to England in 1740 as the representative of Massachusetts in a boundary dispute with New Hampshire. He was a member of the Massachusetts Council from 1749 to 1756, was appointed judge of probate in 1752, and was chief justice of the superior court of the province from 1761 to 1769.

In 1754 he was a delegate from Massachusetts to the Albany Convention, and, with Benjamin Franklin, was a member of the committee appointed to draw up a plan of union.

He was lieutenant-governor of the province from 1758 to 1771, acting as governor in the latter two years. He became governor from 1771 to 1774 — crucial years leading into the American Revolution. Though he recognized the legality of the Stamp Act of 1765, he considered the measure inexpedient and impolitic and urged its repeal. But his attitude was misunderstood. He was considered by many to have instigated the passage of the Act and in August 1765 a mob ransacked his Boston residence, removing or destroying furniture, silver, and other household items. In addition, many valuable manuscripts and documents were scattered and much of Hutchinson’s work on the third volume of his history of Massachusetts was lost.

He was acting governor at the time of the Boston Massacre in 1770, and was virtually forced by the citizens of Boston, under the leadership of Samuel Adams, to order the removal of the British troops from the town. Throughout the pre-Revolutionary disturbances in Massachusetts he was the representative of the British ministry, and though he disapproved of some of the ministerial measures he felt impelled to enforce them — and necessarily incurred the hostility of the Patriots.

After the appointment of General Thomas Gage as military governor in May 1774, he went into exile in England, where he acted as an adviser on American affairs to George III and the British ministry. He uniformly counseled moderation.

In addition to his prominence in the events leading up to the American Revolution, Hutchinson is also remembered as an historian. He wrote an accurate and very valuable three-volume History of the Province of Massachusetts Bay, (vol. I, 1764; vol. II, 1767; vol. iii, 1828), the last of which was published posthumously.

No man will ever bring out of the Presidency the reputation which carries him into it.

Formal signing of the Declaration of Independence by members of the Second Continental Congress.