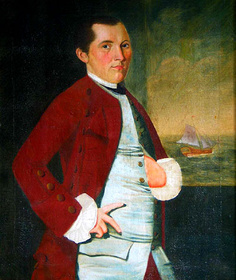 Silas Dean, American diplomat, was born in Groton, Connecticut, in 1737. He graduated at Yale in 1758; in 1761 was admitted to the bar, but instead of practicing he became a merchant at Wethersfield, Connecticut. He took an active part in the movements in Connecticut preceding the American Revolution, and from 1774 to 1776 he was a delegate to the first and second Continental Congresses.

Early in 1776 he was sent to France by Congress, in a semi-official capacity, as a secret agent to induce the French government to lend its financial aid to the colonies. Subsequently he became, with Benjamin Franklin and Arthur Lee, one of the regularly accredited commissioners to France from Congress. On arriving in Paris, Deane at once opened negotiations with the French Foreign Minister, comte de Vergennes, and the playwright, Beaumarchais, securing through the latter the shipment of many vessel loads of arms and munitions of war to America. He also enlisted the services of a number of Continental soldiers of fortune, among whom were Lafayette, Baron Johann De Kalb and Thomas Conway. His carelessness in keeping account of his receipts and expenditures, and the differences between himself and Arthur Lee regarding the contracts with Beaumarchais, eventually led, in November 1777, to his recall to face charges, of which Lee's complaints formed the basis. Before returning to America, however; he signed on 6 February 1778 the treaties of amity and commerce and of alliance which he and the other commissioners had successfully negotiated.

In America he was defended by John Jay and John Adams, and after stating his case to Congress was allowed to return to Paris (1781) to settle his affairs. Differences with various French officials led to his retirement to Holland, where he remained until after the treaty of peace had been signed, when he settled in England.

The publication of some intercepted letters in Rivington’s Royal Gazette in New York (1781), in which Deane declared his belief that the struggle for independence was hopeless and counselled a return to British allegiance, aroused such animosity against him in America that for some years he remained in England. He died on shipboard in Deal harbor, England, on 23 September 1789, after having embarked for America on a Boston packet. No evidence of his dishonesty was ever discovered, and Congress recognized the validity of his claims by voting $37,000 to his heirs in 1842.