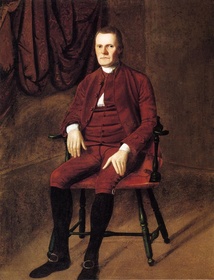 Listen to Episode 19 of Ned Ryun's podcast, History of the Constitutional Convention. It has a very good twelve-minute overview of the life of Roger Sherman.

Roger Sherman, American political leader and signer of the Declaration of Independence, was born at Newton, Massachusetts, in 1721. He moved with his parents to Stoughton in 1723, attended the country school there, and at an early age learned the cobbler’s trade in his father’s shop. Removing to New Milford, Connecticut, in 1743, he worked as county surveyor, engaged in mercantile pursuits, studied law, and in 1754 was admitted to the bar. He represented New Milford in the Connecticut Assembly in 1755 – 56 and again in 1758 – 61.

He was on the committee which drafted the Declaration of Independence (along with Thomas Jefferson, John Adams, Benjamin Franklin, and Robert Livingston), and also on that which drafted the Articles of Confederation. His greatest public service, however, was performed at the Constitutional Convention. In the bitter conflict between the large state party and the small state party he and his colleagues, Oliver Ellsworth and William Samuel Johnson, acted as peacemakers. Their share in bringing about the final settlement, which provided for equal representation in one house and proportional representation in the other, was so important that the settlement itself has come to be called the Connecticut Compromise. He helped to defeat the proposal to give Congress a veto on state legislation, showing that it was illogical to confer such a power, since the constitution itself is the law of the land and no state act contravening it is legal.

In the U.S. Congress (1789 – 93) he favored the assumption of the state debts, the establishment of a national bank, and the adoption of a protective tariff policy. Although strongly opposed to slavery, he refused to support the Parker resolution of 1789 — providing for a duty of ten dollars per head on Negroes brought from Africa — on the ground that it emphasized the property element in slavery.

He died in New Haven on the in 1793. Sherman was not a deep and original thinker, nor was he a brilliant leader, but owing to his conservative temperament, his sound judgment, and his wide experience, he was unequaled in leading the compromise cause in the convention of 1787.

The press was the mass medium of the eighteenth century, the only way to bring both news and commentary to a broad public audience. The popularity of newspapers soared in Revolutionary America: By the late 1780s, the United States had about ninety-five newspapers, over twice the number at the time of independence. Moreover, the newspapers of 1776 were weeklies, but those of 1787 we often published two or three times a week. There were even a few that appeared daily to satisfy the hungry reading public.

He is a governor that governs his passions, and is a servant that serves them.