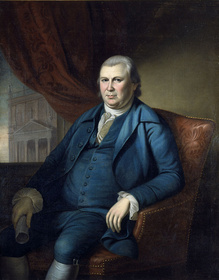 Robert Morris, American financier — sometimes called the Financier of the American Revolution — and a signer of the Declaration of Independence, was born in Liverpool, England, in 1734. He emigrated to America in 1747, entered a mercantile house, and in 1754 became a member of a prosperous firm, Willing, Morris & Co. In the conflict with England Morris took the side of the colonists, but associated himself with the conservative group of Pennsylvania Whigs who followed the lead of John Dickinson and James Wilson, rather than with the more radical faction represented by Thomas Paine.

His greatest public service was the financing of the Revolutionary War. As chairman or member of various committees he practically controlled the financial operations of Congress from 1776 – 78, and when the board system was superseded in 1781 by single-headed executive departments he was chosen superintendent of finance. With the able cooperation of his assistant, Gouverneur Morris (no relation), he filled this position with great efficiency during the trying years from 1781 – 84. For the same period he was also Agent of Marine, and hence head of the navy department. Through requisitions on the states and loans from the French, and in large measure through money advanced out of his own pocket or borrowed on his private credit, he furnished the means to transfer Washington's army from Dobbs Ferry to Yorktown in 1781.

He established the Bank of North America in Philadelphia in 1781, chartered first by Congress and later by Pennsylvania It was the oldest financial institution in the United States and the first which had an even partial national character. A confusion of public and private accounts, due primarily to the fact that his own credit was superior to that of the United States, gave rise to charges of dishonesty, of which he was acquitted by a vote of Congress.

He was a member of the Constitutional Convention of 1787, but took little part in its deliberations beyond making the speech which placed Washington in nomination for the presidency of the body.

On the formation of the new United States government he was offered, but declined, an appointment as Secretary of the Treasury; he instead urged the appointment of Alexander Hamilton. As a U.S. Senator (1789 – 95), he supported the Federalist policies and gave Hamilton considerable assistance in carrying out his financial plans, taking part, according to tradition, in arranging a bargain by which certain Virginia representatives were induced to vote for the funding of the states debts in return for the location of the Federal capital on the Potomac.

After the war he gradually disposed of his mercantile and banking interests and engaged extensively in western land speculation. At one time or another he owned wholly or in major part nearly the entire western half of New York state, two million acres in Georgia and about one million each in Pennsylvania, Virginia and South Carolina. The slow development of this property, the failure of a London bank in which he had funds invested, the erection of a palatial residence in Philadelphia, and the dishonesty of one of his partners, finally drove him into bankruptcy. He was confined in a debtors’ prison for more than three years (1798 – 1801).

Robert Morris died in Philadelphia in 1806.

The truth is, all might be free if they valued freedom, and defended it as they ought.