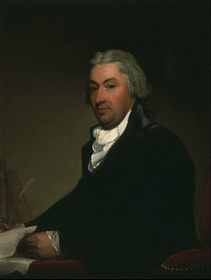 Robert R. Livingston was a delegate to the Continental and Confederation congresses and was on the committee that drafted the Declaration of Independence. He was the first confederation secretary for foreign affairs until 1784 and he served as New York's chancellor, the chief equity judge. He was a member of the New York Ratifying Convention, and his notes of the debates are valuable in understanding the last, crucial days of the convention. As the highest ranking judicial officer in New York, he administered the oath of office to George Washington as president on April 30, 1789.

[Lord Frederick] North defended his role in the war for America to his death. He insisted that it did not originate in a despotic wish to tyrannise America, but from the desire of maintaining constitutional authority of Parliament over the colonies. He admitted that the war with American had been unfortunate but not unjust, adding that if he had been forced to mount the scaffold in consequence of the part that I have performed in its prosecution, I shall continue to maintain that it was founded in right and dictated by necessity.

One of the most essential branches of English liberty is the freedom of one’s house. A man’s house is his castle; and whilst he is quiet, he is as well guarded as a prince in his castle.