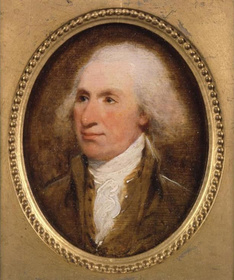 Philip John Schuyler (1733 - 1804), a Major General in the American Continental army, was born at Albany, New York in 1733. His family had roots going back to the Dutch New Amsterdam settlement, where Philip Pieterse Schuyler (d. 1683) emigrated in 1650 from Amsterdam. His son, Peter (1657 - 1724), was the first mayor of Albany and chairman of the board of Indian commissioners of New York colony. The family was one of the wealthiest and most influential in the colony and was closely related by marriage to the Van Rensselaers (his wife was Catherine Van Rensselaer and his daughter Margarita married a Rensselaer), Van Cortlandts (his mother was Cornelia Van Cortlandt), and other representatives of the old Dutch aristocracy.

Philip Schuyler served with the British in the Provincial Army during the French and Indian War (1754 - 63), first as captain and later as deputy-commissary with the rank of major. He took part in the battles of Lake George (1755), Oswego River (1756), Ticonderoga (1758), and Fort Frontenac (1758).

From 1768 to 1775 he represented Albany in the New York Assembly, and he was closely associated with the Livingston family in the leadership of the Presbyterian or Whig party. He was a New York delegate to the Second Continental Congress in May 1775, and on 19 June was chosen one of the four major generals in the Continental Army under George Washington.

Put in command of the Northern Department of New York, he established headquarters at Albany, and made preparations for an invasion of Canada. Soon after the expedition started he was prostrated by rheumatic gout, and the actual command was delegated to General Richard Montgomery. Schuyler returned to Ticonderoga and later to Albany, where he spent the winter of 1775 - 76 in collecting and forwarding supplies to Canada and suppressing Loyalists and their Indian allies in the Mohawk Valley.

At the Battle of Quebec (31-Dec-1775), which failed and where Montgomery died, the army retreated to Crown Point. Its commander, General John Sullivan, was superseded by General Horatio Gates. Gates claimed precedence over Schuyler and, on failing to secure recognition, intrigued to bring about Schuyler’s dismissal. The controversy was taken to Congress. The earlier (necessary) withdrawal of the army from Crown Point in 1776 and the evacuation of Ticonderoga in 1777 were magnified by Schuyler's enemies into a retreat. On 19 August 1777 he was replaced.

A court martial appointed in 1778 acquitted him on every charge. He resigned from the army in April 1779.

Active for many years as Indian commissioner and surveyor-general, Schuyler helped to settle the New York boundary disputes with Massachusetts and Pennsylvania. He had prepared plans for the construction of a canal between the Hudson River and Lake Champlain before 1776, and, in 1792 - 96, carried to a successful conclusion a more ambitious scheme for connecting the Hudson with Lake Ontario by way of the Mohawk River, Oneida Lake, and the Onondaga River.

He died at his mansion in Albany in November 1804.

Should the States reject this excellent Constitution, the probability is, an opportunity will never again offer to cancel another in peace — the next will be drawn in blood.