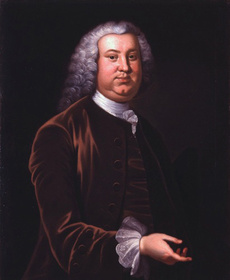 QUICK FACTS
BORN:
10 September 1721 in Williamsburg, Virginia
DIED:
22 October 1775 in Philadelphia, Pennsylvania
Buried in the chapel of the College of William and Mary.

Randolph wrote the Address of Remonstrance to the king in behalf of the Burgesses against the suggested stamp duties in 1764. His policy was conservative and moderate, and in May 1765 he opposed Patrick Henry's radical Stamp Act Resolutions. In 1766 he resigned as king's attorney and was succeeded by his brother John (1727 – 84). In 1769 he acted as moderator of the privately convened assembly which entered into the non-importation agreement; in May 1773 he became chairman of the first Virginia intercolonial Committee of Correspondence.

He presided over the provincial convention of August 1774, and was a member of the First Continental Congress, of which he was president from 5 September to 22 October 1774. He was re-elected for the Second Congress in March 1775, and on 10 May was again chosen to preside, though he left on the 24th to attend a meeting at Williamsburg of the Virginia Burgesses. He then returned to Congress, where John Hancock had meanwhile been made president. Randolph died of apoplexy in Philadelphia in 1775.

He was provincial grandmaster of the Masons of Virginia, and was an intimate friend of George Washington.

A lawyer without books would be like a workman without tools.