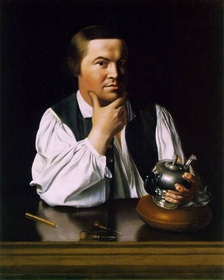 Paul Revere, American engraver and patriot, was born in Boston, Massachusetts, in 1735. He had meager schooling, but in his father’s shop learned the trade of gold and silversmith. He became a proficient copper engraver and engraved several anti-British caricatures in the years before the War of Independence.

In 1756 he was second lieutenant of artillery in the expedition against Crown Point, and for several months was stationed at Fort Edward, in New York. He was one of the Boston grand jurors who refused to serve in 1774 because parliament had made the justices’ salaries independent of the people; was a leader in the Boston Tea Party; was one of the thirty North End mechanics (tradesmen) who patrolled the streets to watch the movements of the British troops and Tories; and in December 1774 was sent to Portsmouth, New Hampshire, to urge the seizure of military stores there, and induced the colonists to attack and capture Fort William and Mary — one of the first acts of military force in the war.

His midnight ride from Charleston to Lexington on 18-19 of April 1775, to alert of the approach of British troops from Boston, is Revere’s most famous exploit, and his warning to John Hancock and Samuel Adams prevented them from being arrested by the British.

In 1775 Revere was sent by the Massachusetts provincial congress to Philadelphia to study the working of the only powder mill in the colonies, and although he was allowed only to pass through the building, he obtained sufficient information to enable him to set up a powder mill at Canton. He was commissioned a major of infantry in the Massachusetts militia in April 1776; was promoted to the rank of lieutenant colonel of artillery in November; was stationed at Castle William, defending Boston harbor, and finally received command of the fort. He served in an expedition to Rhode Island in 1778, and in the following year participated in the unsuccessful Penobscot Expedition, a battle fought on both land and sea, in what is today Maine. After his return he was accused of having disobeyed the orders of the commanding officer, was tried by court-martial, and was acquitted.

After the war he engaged in the manufacture of gold and silverware, and became a pioneer in the production in America of copper plating and copper spikes for ships. In 1795, as grandmaster of the Masonic fraternity, he laid the cornerstone of the new State House in Boston, and in this year also founded the Massachusetts Charitable Mechanic Association, becoming its first president.

A lawyer without books would be like a workman without tools.