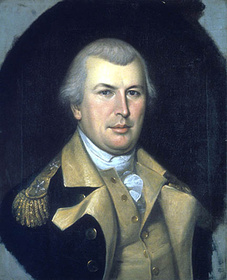 Nathanael Greene, son of a Quaker farmer and smith who became an American general, was born in 1742 at Potowomut, in the township of Warwick, Rhode Island. Though his father's sect discouraged literary accomplishments, he acquired a large amount of general information, and made a special study of mathematics, history, and law. He moved to Coventry in 1770 to take charge of a forge built by his father and his uncles. He was the first to urge the establishment of a public school and was chosen a member of the Rhode Island Assembly, 1770, to which he was re-elected in 1771, 1772 and 1775.

Greene sympathized strongly with the Whig (Patriot) ideas among the colonists, and in 1774 joined the local militia. At this time he began to study the art of war. In December 1774 he was on a committee appointed by the Assembly to revise the militia laws. His zeal in attending to military duty led to his expulsion from the Society of Friends. Not only was Greene deeply interested in the military, he also favored independence, as evidenced by letters to Samuel Ward (Oct-1775 and Jan-1776), a delegate from Rhode Island, to the Continental Congress.

In 1775, in command of militia raised by Rhode Island, he joined General Washington’s Continental Army at Cambridge, Massachusetts, and on 22 June was appointed a brigadier general by Congress. Following the evacuation from Boston by General William Howe and his British forces, Washington assigned to him command of the city.

On 9 August 1776 he was promoted to major general (one of four, including Horatio Gates, Charles Lee, and Israel Putnam) and was put in command of the Continental troops on Long Island. He chose the place for fortifications, and built the redoubts and entrenchments of Fort Putnam (later Fort Greene) on Brooklyn Heights. However he was unable to take part in the Battle of Long Island, due to severe illness.

Though Greene was prominent among those who wanted to burn New York and abandon it, Washington was guided by a Congress that would not allow it. (Much of New York did in fact burn, but how it started has never been discovered.)

Subsequently Greene was placed in command of Fort Lee, in New Jersey, and on 25 October succeeded General Putnam in command of Fort Washington, which lay directly across the Hudson River. Though Washington received orders from Congress (11-Oct) to defend the fort at all costs, he deferred to Greene as to whether he thought it was truly defensible. Greene thought it was. He ordered Colonel Magaw, who was in immediate command, to defend the fort until he should hear from him again, and reinforce it to meet General Howe’s attack. During the ensuing battle, Fort Washington was easily overwhelmed by the British. Nevertheless the blame for the losses of Forts Washington and Lee was put upon Greene, but apparently without his losing the confidence of Washington, who himself assumed the responsibility.

At the Battle of Trenton Greene commanded one of the two American columns (his own, accompanied by Washington, arriving first); after the victory there he urged Washington to push on immediately to Princeton, but was overruled by a council of war.

At the Battle of Brandywine Greene commanded the reserve. At Germantown, Greene’s command, having a greater distance to march than the right wing under Sullivan, failed to arrive in good time — a failure which Greene himself thought (without cause) would cost him Washington’s regard. On their arrival, Greene and his troops in fact distinguished themselves.

At the urgent request of Washington, who had lost many men to hunger at Valley Forge, he accepted the office of Quartermaster General (2-Mar-1778), succeeding Thomas Mifflin. As usual, Greene was inventive and highly organized; he made new contracts with suppliers; improved supply routes; and within a few months the feeding and clothing of the troops was sharply improved.

Greene had become Quartermaster General with the understanding that he should retain the right to command troops in the field; thus we find him at the head of the right wing at Monmouth (28-Jun-1778). In August Greene and Lafayette commanded the land forces sent to Rhode Island to co-operate with French Admiral d'Estaing, in an expedition which proved abortive. In June 1780 Greene commanded in a skirmish at Springfield, New Jersey. In August he resigned the office of Quartermaster General, after a long and bitter struggle with Congress over the interference in army administration by the Treasury Board and by commissions appointed by Congress. Before his resignation became effective he participated in the court-martial of Major John André (29-Sep-1780) and the verdict of (the unsoldierly) death by hanging.

Commander of the Southern Army

On 14 October 1780 Greene succeeded Horatio Gates as commander-in-chief of the Southern army, taking command at Charlotte, North Carolina. The army was weak, badly equipped, and was opposed by a superior force under General Charles Cornwallis. So Greene decided to divide his own troops, thus forcing the division of the British forces as well, creating the possibility of a strategic interplay of forces. This strategy led to General Daniel Morgan’s victory at Cowpens (17-Jan-1781), and to the defeat at Guilford Court House, North Carolina (15-Mar-1781), in which after having weakened the British troops by continual movement, and drawn in reinforcements for his own army, Greene was defeated — but only at such cost to the the British that Banastre Tarleton called it the pledge of ultimate defeat.

Three days after this battle Cornwallis withdrew toward Wilmington. Greene’s generalship and judgment were again conspicuous in the next few weeks, in which he allowed Cornwallis to march north to Virginia while he himself turned swiftly to the reconquest of the inner country of South Carolina. This, in spite of a reverse sustained at Lord Rawdon’s hands at Hobkirk’s Hill (2 miles north of Camden, 25-Apr-1781), he achieved by the end of June, the British retiring to the coast. Greene then gave his forces a six weeks’ rest on the High Hills of the Santee, and on 8 September, with 2,600 men, engaged the British under Lt. Colonel James Stuart (who had succeeded Lord Rawdon) at Eutaw Springs; the battle, although tactically drawn, so weakened the British that they withdrew to Charleston, where Greene penned them in during the remaining months of the war.

Greene’s Southern Campaign showed remarkable strategic features that remind one of Vicomte de Turenne, the 17th-century French commander whom he had taken as his model in his studies before the war. He excelled in dividing, eluding, and tiring his opponent by long marches, and in actual conflict, forcing him to pay for a temporary advantage at a price he could not afford. He was greatly assisted by his able subordinates, including Tadeusz Kościuszko, a Polish engineer; cavalry captains Henry Light-Horse Harry Lee and William Washington; and militia leaders Thomas Sumter and Francis Marion.

Following the war, South Carolina and Georgia voted Greene liberal grants of lands and money. He sold the South Carolina estate (Boone’s Barony) to meet bills for the rations of his Southern army. After twice refusing the post of secretary of war (1781 and 1784, under the Articles of Confederation), he settled with his wife, Caty, and children in 1785 on the Georgia estate, Mulberry Grove, north of Savannah. There he died of sunstroke on 19 June 1786.

Like other prominent generals on the American side Greene was a self-trained soldier; his strategy of exhausting the enemy in the South shortened a war that the Americans could never have won directly. We fight, get beat, rise, and fight again, he wrote.

He may be the greatest general who never won a battle.

Yet there is no doubt that his natural abilities were what most distinguished [John] Marshal from other lawyers and jurists. His head, said Senator Rufus King, is the best organized of anyone I have known. Marshal could grasp a subject in its whole and yet simultaneously analyze it parts and relate them to the whole. He could move progressively and efficiently from premise to conclusion in a logical and rigorous manner and extract the essence of the law from the mass of particulars. In the words of Justice Story, he had the remarkable ability to seize, as it were by intuition, the very spirit of juridical doctrines. Even Jefferson acknowledged Marshall’s talent, but he scarcely respected it. Jefferson told Story that when conversing with Marshall, I never admit anything. So sure as you admit any position to be good, no matter how remote from the conclusion he seeks to establish, you are gone. So great is his sophistry you must never give him an affirmative answer, or you will be forced to grant his conclusion. Why, if he were to ask me whether it were daylight or not, I’d reply, Sir, I don’t know, I can’t tell.

This is the dirtiest place in the world.