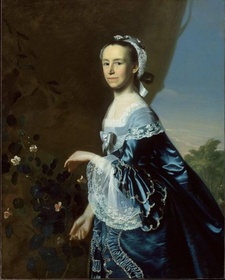 Mercy Otis Warren, American writer, sister of James Otis, was born in Barnstable, Massachussets in 1728. She married James Warren (1726—1808) of Plymouth, a college friend of her brother, in 1754. Her literary inclinations were fostered by both these men and she began writing poems, dramas, and essays.

Because her husband took a leading part in events leading up to, during, and after the American Revolution — as a member of the Massachusetts House of Representatives (1766—74) and its speaker (1776—77; 1787—88), as well as a member (1774—1775) and president (1775) of the Provincial Congress — Warren was keenly interested in following its progress.

Her gift of satire was used in her political dramas, The Adulator (1773) and The Group (1775). Abigail Adams, a close friend of Warren’s, approved and encouraged her efforts — as did her husband, John Adams.

Warren’s tragedies The Sack of Rome and The Ladies of Castile, were included in her Poems, Dramatic and Miscellaneous (1790), dedicated to General Washington. Apart from their historical interest, her poems and dramas are not generally read today. In 1805 she published The Rise, Progress and Termination of the American Revolution, a history of the revolution that included personal criticism of John Adams — which he took issue with and bitterly resented.

Surviving her husband by nearly six years, Mercy Otis Warren died on 19 October 1814 at the age of 86.

Charles Willson Peale, despite his devotion to the taxonomic and contemplative majesty of the natural world, nevertheless loved novelties and used all sorts of amusements to attract customers to his museum. He eventually resorted to hiring a popular musical performer who played five different instruments simultaneously, using all parts of his body. Following Peale’s death the museum passed into the enterprising hands of P. T. Barnum, becoming part of his traveling circus — a romantic ending for an Enlightenment institution.

Nothing short of independence, it appears to me, can possibly do. A peace on other terms would, if I may be allowed the expression, be a peace of war.