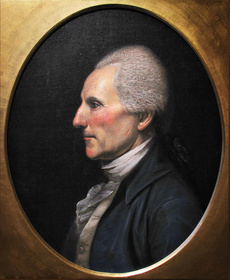 Richard Henry Lee, American statesman and orator, was born at Stratford, in Westmoreland county, Virginia, in 1732. He was one of six distinguished sons of Thomas Lee (d. 1750), a descendant of an old Cavalier family, the first representative of which in America was Richard Lee, who was a member of the privy council, and early in the reign of Charles I emigrated to Virginia. Richard Henry received an academic education in England, then after spending some time in travel, having come into possession of a fine property left him by his father, returned to Virginia in 1752 and for several years applied himself to varied studies.

When twenty-five he was appointed justice of the peace of Westmoreland County, and in the same year was chosen a member of the Virginia House of Burgesses, in which he served 1758 – 75. He kept a diffident silence during two sessions, his first speech being in strong opposition to slavery, which he proposed to discourage and eventually to abolish, by imposing a heavy tax on all further importations. He early allied himself with the Patriot or Whig element in Virginia, and in the years immediately preceding the Revolutionary War was conspicuous as an opponent of the arbitrary measures of the British ministry. In 1768, in a letter to John Dickinson of Pennsylvania, he suggested a private correspondence among the friends of liberty in the different colonies, and in 1773 he became a member of the Virginia Committee of Correspondence. Lee was one of the delegates from Virginia to the First Continental Congress at Philadelphia in 1774, and prepared the address to the people of British America, and the second address to the people of Great Britain, which are among the most effective papers of the time. In accordance with instructions given by the Virginia House of Burgesses, Lee introduced into the Second Continental Congress, on 7 June 1776, the following three famous resolutions:

That these United Colonies are, and of right ought to be, free and independent States, that they are absolved from all allegiance to the British Crown, and that all political connection between them and the state of Great Britain is, and ought to be, totally dissolved. That it is expedient to take the most effectual measures for forming foreign Alliances. That a plan of confederation be prepared and transmitted to the respective Colonies for their consideration and approbation.

After debating the first of these resolutions for three days, Congress resolved that the further consideration of it should be postponed until the 1 July, but that a committee should be appointed to prepare a declaration of independence. The illness of Lee’s wife prevented him from being a member of that committee, but his first resolution was adopted on 2 July and the Declaration of Independence, prepared principally by Thomas Jefferson, was adopted two days later. Lee was in Congress from 1774 – 80, and was especially prominent in connection with foreign affairs. He was a member of the Virginia House of Delegates in 1777, 1780 – 84, and 1786 – 87; was in Congress again from 1784 – 87, being president in 1784 – 86. Though strongly opposed to the adoption of the Federal Constitution in 1789 — owing to what he regarded as its dangerous infringements upon the independent power of the states — Lee nevertheless accepted nomination as one of two Senators from Virginia in the hope of bringing about amendments. He proposed the Tenth Amendment in substantially the form in which it was adopted, and subsequently became a warm supporter of Washington’s administration. His prejudices against the Constitution were largely removed by seeing how it worked in practice. He retired from public life in 1792, and died at Chantilly, Westmoreland County, in 1794.

At this auspicious period, the United States came into existence as a nation, and if their citizens should not be completely free and happy, the fault will be entirely their own.