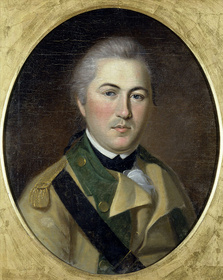 Henry Lee III, Continental Army officer, was born near Dumfries, Virginia, in 1756. His father was first cousin to the Lees of Stratford Hall, including Richard Henry, Francis Lightfoot, William, and Arthur. He graduated from Princeton in 1773 and had an eye on a legal career, but soon afterwards, on the outbreak of the War of Independence, he became an officer in the Continental Army.

He served with great distinction under General Washington, and in 1778 was promoted major and given the command of a small irregular corps, with which he won a great reputation as a leader of light troops. His services on the outpost line of the army earned for him the nickname Light Horse Harry. His greatest exploit was the brilliant surprise against the British fort at Paulus Hook, New Jersey, on 19 August 1779 — for this feat he received a gold medal, a reward given to no other officer below general’s rank in the whole war.

He was promoted lieutenant colonel 1780, and sent with a picked corps of dragoons to the southern theater of war. Here he rendered invaluable services in victory and defeat, notably at Guilford Court House, Camden and Eutaw Springs. He was present for the surrender of Cornwallis at Yorktown, and afterwards left the army owing to ill-health.

In the Virginia convention he favored adoption of the Federal constitution. From 1789 to 1791 he served in the Virginia General Assembly, and from 1791 to 1794 was Governor. In 1794 Washington sent him to help in the suppression of the Whiskey Rebellion in western Pennsylvania. A new county of Virginia was named after him during his governorship. He was a major general in 1798 – 1800. From 1799 to 1801 he served in Congress.

Soon after the War of 1812 broke out, Lee, while helping to resist the attack of a mob on his friend, A. C. Hanson — editor in Baltimore of The Federal Republican (which had opposed the war) — received grave injuries, from which he never recovered. He also served in debtors’ prison for a year, as a result of years of speculation and bad investments.

Lee was the father of Confederate General Robert E. Lee. On the death of Washington in 1799, he delivered the Funeral Oration, which contains the famous phrase first in war, first in peace, and first in the hearts of his countrymen. He died at the house of General Nathanael Greene (who had died in 1786) in Cumberland Island, Georgia, in 1818.

The press was the mass medium of the eighteenth century, the only way to bring both news and commentary to a broad public audience. The popularity of newspapers soared in Revolutionary America: By the late 1780s, the United States had about ninety-five newspapers, over twice the number at the time of independence. Moreover, the newspapers of 1776 were weeklies, but those of 1787 we often published two or three times a week. There were even a few that appeared daily to satisfy the hungry reading public.

I have often observed that by lending words for my thoughts I understand my thoughts the better. Thoughts are a kind of mental smoke, which require words to illuminate them.