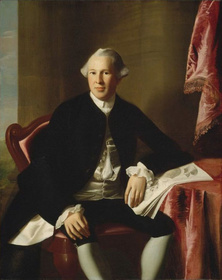 Joseph Warren, American patriot and politician, was born at Roxbury, Massachusetts, in 1741. He graduated from Harvard College in 1759, taught in a school at Roxbury in 1760 – 61, studied medicine, and began to practice in Boston in 1764. The Stamp Act agitation aroused his interest in public questions. He soon became associated with Samuel Adams, John Adams and Josiah Quincy, Jr., as a leader of the popular party, and contributed articles and letters to the Boston Gazette using the signature True Patriot.

The efforts of Samuel Adams to secure the appointment of committees of correspondence met with his hearty support, and he and Adams were the two leading members of the first Boston Committee of Correspondence, chosen in 1772. As chairman of a committee he drafted the famous Suffolk Resolves, which were unanimously adopted by a convention at Milton on the 9th of September 1774. These resolves urged forcible opposition to Great Britain if it should prove to be necessary, pledged submission to such measures as the Continental Congress might recommend, and favored the calling of a provincial congress.

Warren was a member of the first three provincial congresses (1774 – 1775), president of the third, and an active member of the Committee of Public Safety. He took an active part in the fighting at Lexington and Concord (14-Apr-1775), and was appointed Major General of the Massachusetts troops, next in rank to Artemas Ward, on 14 June 1775. Three days later, before his commission was made out, he took part as a volunteer, under the orders of militia General Israel Putnam and Colonel William Prescott, in the Battle of Bunker Hill (Breed’s Hill), where he was killed.

Next to the Adamses, Warren was the most influential leader of the extreme Whig faction in Massachusetts. His tragic death strengthened their zeal for the popular cause and helped to prepare the way for the acceptance of the Declaration of Independence. Warren’s speeches are typical examples of the old style of American political eloquence. His best-known orations were those delivered in Old South Church on the second and fifth anniversaries (1772 and 1775) of the Boston Massacre.

I will never consent to have our sex considered an inferior point of light. Let each planet shine in their own orbit. God and nature designed it so — if man is Lord, woman is Lordess — that is what I contend for.