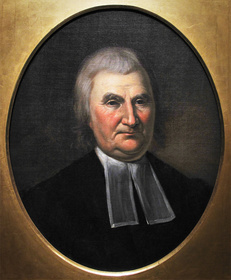 John Witherspoon, Scottish-American minister, educationalist, and signer of the Declaration of Independence was born at Gifford, Yester parish, East Lothian, Scotland in 1723. The son of a minister of the Scotch Established Church, James Witherspoon (d. 1759), he studied at Haddington and graduated from the University of Edinburgh in 1739. He continued on at the University to complete a divinity course and was licensed to preach by the Haddington presbytery in 1743. After two years as a probationer, he was ordained minister of the parish of Beith.

He published several tracts — Ecclesiastical Characteristics (1753), Serious Apology (1764), and History of a Corporation of Servants (1765) — that attacked various abuses in the church and satirized the moderate party. In 1757 he had become pastor at Paisley. In 1769 he received the degree of D.D. from Aberdeen. He was sued for libel for printing a rebuke to some of his parishioners who had travestied the sacrament of the Lord’s Supper and after several years in the courts he was ordered to pay damages of £150 — which was raised by his parishioners.

Refusing calls to churches in Dublin and Rotterdam, he also declined an invitation brought to him in 1766 by Richard Stockton and Benjamin Rush to go to America as president of the College of New Jersey. He did however accept a second invitation.

He and his family left Paisley for the Americas in May 1768 and he became the sixth president of the College of New Jersey (now Princeton University) at the age of 45.

Badly in need of funds and books, his close relation with the Scotch Church secured important material assistance for the college and he toured New England to collect contributions.

At the College of New Jersey, Witherspoon secured an excellent set of scientific apparatus and improved the instruction in the natural sciences; he introduced courses in Hebrew and French about 1772. He also did a lot of the actual teaching, giving courses in languages, divinity, moral philosophy, and eloquence.

In the American Presbyterian church he was a prominent figure; he worked for union with the Congregationalists and with the Dutch Reformed body; and at the synod of 1786 he was one of the committee which reported in favor of the formation of a General Assembly and which drafted a system of general rules for government.

In politics he did much to influence Irish and Scotch-Irish Presbyterians to support the Whig party. He was a member of the provincial congress which met at New Brunswick in July 1974; presided over the Somerset county committee of correspondence in 1774—75; was a member of the New Jersey constitutional convention in the spring of 1776; and from June 1776 to the autumn of 1779, and again from 1780—83, he was a member of the Continental Congress where he urged the adoption of the Declaration of Independence — the only clergyman to sign it.

He became a member of the secret committee of correspondence in October 1776, of the Board of War in October 1777, and of the committee on finance in 1778. He opposed the issue of paper money, supported Robert Morris’s plan for a national bank, and was prominently connected with all Congressional action in regard to the peace with Great Britain.

In addition to his activities in Philadelphia, Witherspoon contributed to the Patriot cause by sermons, writings, and by participation in local activities. His Essay on the Connection between the Doctrine of Justification by the Imputed Righteousness of Christ and Holiness of Life (1756) was his principal theological work.

As students of Voltaire, Diderot, and Rousseau are always reminding us, the age of reason was really an age of sentiment. In this too, Washington was a man of his age. When he established the first general decoration in the American Army, the Purple Heart, it was not (as it became in the twentieth century) an award available to all soldiers wounded in the line of duty. Only privates and noncomissioned officers could win the original Badge of Military Merit, a cloth-shaped heart sewn over the man’s actual heart, which allowed him to pass all guards and sentinels which officers are permitted to do. The symbol was not of heart’s blood shed, but of virtue proceeding from the heart. Limiting the award to nonofficers was meant to indicate that great virtue can be shown regardless of rank — that in Washington’s words, the road to glory in a patriot army and a free country is thus open to all.

The public cannot be too curious concerning the characters of public men.