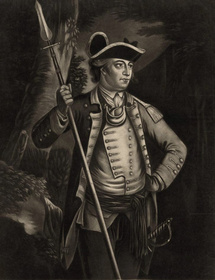 Commissioned a major in the New Hampshire militia in 1772, he and John Langdon led an expedition which captured Fort William and Mary at New Castle on 15 December 1774.

Sullivan commanded a brigade during the Siege of Boston and was appointed brigadier general in the Continental Army in June 1775.

In June 1776 he took command of the American army in Canada and after an unsuccessful skirmish with the British at Three Rivers (8-Jun-1776) retreated to Crown Point, New York. Rejoining Washington's army in New York and promoted to major general, he served under General Israel Putnam in the Battle of Long Island and was taken prisoner (27-Aug-1776).

In December he was exchanged.

Succeeding General Charles Lee in command of the right wing of Washington’s army, Sullivan led an attack on the Hessians at the Battle of Trenton (26-Dec-1776) and led a night attack against British and Loyalists on Staten Island (22-Aug-1777). In the Battle of Brandywine (11-Sep-1777), he again commanded the American right. A few weeks later he took part in the Battle of Germantown (4-Oct-1777).

In March 1778 he was placed in command in Rhode Island, and in the following summer plans were made for his cooperation with the French fleet under Comte d'Estaing in an attack on Newport — which came to nothing. After a brief engagement (Aug. 29) at Quaker Hill, at the north end of the island of Rhode Island, Sullivan was obliged to retreat.

On 29 August 1779, Sullivan and about 4,000 troops, defeated the Iroquois and their Loyalist allies at Newtown (now Elmira), New York. The Americans burned their villages and destroyed their crops and orchards. Severely criticized for his conduct as leader of the expedition, he nonetheless received the thanks of Congress in October 1779.

In November Sullivan resigned from the army but continued to be politically active. He again became a delegate to the Continental Congress (1780—81), then attorney general (1782—85), and president of New Hampshire (1786—87 and 1789). In June 1788, he presided over the New Hampshire convention that ratified the United States Constitution.

Visitors to Monticello often wonder at its practical accessories. Jefferson labored a month to save a minute. His home was impractical from the start — by reason of its very site (on a mountain), by the height given the first version of the building (later disguised in a way that left useless spaces in and around its dome), by the perpetual course of its dismantling and reassembly. To make the house more convenient, he made his daughter and her children live for years in a chaos of artistic second thoughts, sometimes sheltered only by canvas as the roof rose, fell, and assumed new shapes in his mind.

It is time we have a government established & Washington at its head. But we are too poor for Monarchy, too wise for despotism, too dissipated, selfish & extravagant for Republicanism.