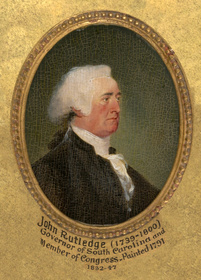 John Rutledge, American jurist and politician, was born in 1739 into a prominent family in Charleston, South Carolina. The eldest of seven children — and the brother of Edward Rutledge, a signer of the Declaration of Independence — his father was a physician of Scots-Irish descent; his mother was English. He began the study of law in Charleston, furthered his education in London, was admitted to the English bar in 1760, and returned to Charleston in 1761 to establish his practice.

During the Revolution Rutledge was politically active at both the national and state levels. He was a delegate to the Stamp Act Congress (1765), the First Continental Congress (1774), and the Second Continental Congress (1775 - 76; 1782 - 83). In South Carolina he was chairman of the committee which framed the state constitution (1776) and the first president (governor) of South Carolina (1776 - 78). Disapproving of certain changes in the constitution he resigned in 1778, but was elected again the following year and served until 1782.

When the new government was formed President Washington appointed Rutledge Associate Justice of the U.S. Supreme Court (1789 - 91), but since the Court heard no cases in its first two years and there was little to do, he resigned, to serve as Chief Justice of the South Carolina Supreme Court (1791 - 95). In 1795 Washington nominated him to the position he had sought all along — Chief Justice of the U.S. Supreme Court. However, because of his wildly outspoken objections to the Jay Treaty — he called it prostitution — he presided only during the August term; the Senate refused to confirm him.

On hearing the news that he was not to be made Chief Justice, he attempted suicide by jumping off a wharf into the Charleston Bay. His public career over, his mind failing, Rutledge died in Charleston in 1800.