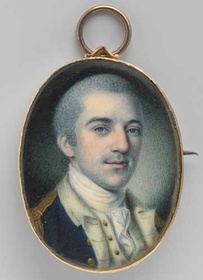 John Laurens, Lieutenant Colonel in the Continental Army, son of wealthy slave-merchant Henry Laurens, was born at Charleston, South Carolina in 1754. While studying law in England he married Martha Manning (Oct-1776), who was pregnant. Less than a year later, over the objections of his father, he quit the law and quit England — never returning to his wife (who died in 1781) — to participate in the Revolutionary War in North America.

Arriving in Pennsylvania in August 1777, he joined General Washington’s staff as a volunteer, who, among other things, could translate for the French officers, who were steadily arriving from Europe to fight alongside the Americans. One of these was the Marquis de Lafayette who was not yet 20, and with whom he became friends. Another, with whom he became fast friends, very nearly the same age as the 22-year-old Laurens, was Alexander Hamilton — who was effectively acting as Washington’s chief of staff.

Laurens soon gained his commander’s confidence, which he reciprocated with the most devoted attachment. He became Washington’s confidential secretary and performed his delicate duties with tact and skill.

Laurens showed both courage and recklessness at the Battle of Brandywine (11-Sep-1777). It was not his fault that he was not killed or wounded, Lafayette wryly commented. After showing the same rash bravery while storming the Chew House during the Battle of Germantown (4-Oct-1777), he was made a Lieutenant Colonel and officially appointed aide-de-camp. He was now part of Washington’s military family.

Laurens was present for all the remaining battles with Washington. And at the Battle of Monmouth (28-Jun-1778) he saved Washington’s life.

In December 1778, angered by contemptuous comments about Washington’s abilities as commander-in-chief, Laurens challenged General Charles Lee to a duel. Despite violating protocol by issuing a challenge on Washington’s behalf, Lee accepted — and in the ensuing exchange of shots was slightly wounded.

Laurens distinguished himself at the Battle of Savannah (29-Dec-1778), despite the American loss, and now pushed again, as he had previously, for slaves to join the army. Though he had grown up on a rice plantation with slaves, Laurens was opposed to slavery. He championed creating a regiment of slaves, who, when they had completed their service, would be free. As the British moved the war to the South the Continental Congress finally accepted his proposal in 1779 — pending approval by the state Assemblies of Georgia and South Carolina. Both Assemblies roundly defeated the plan.

Following the American defeat at Charleston (12-May-1780, after a six week siege), Laurens was taken captive by the British. Part of a prisoner exchange in November, he was then appointed by Congress to serve as special emissary to France. Arriving in March 1781, he had little success appealing to the French court for additional supplies, but he did receive a promise of increased naval support. He also secured a loan and supplies from the Dutch.

Laurens rejoined Washington’s army in time for the defining Battle of Yorktown (28-Sep to 19-Oct-1781). The French Navy intercepted the British, leaving Major General Cornwallis’s army stranded and without means of escape. During the final days of the American and French siege he was a member of the American storming party, led by Alexander Hamilton, which captured an advanced redoubt. On 17 October the British requested a ceasefire. Laurens, along with vicomte de Noailles, negotiated the terms of surrender with the British.

Though the American victory at Yorktown virtually ended the war, it did not end the haphazard skirmishing — especially in the South — which continued until the peace was formally concluded. During one of these trifling affairs, on the Combahee River near the southern coast of South Carolina, Laurens exposed himself needlessly and received a fatal wound (27-Aug-1782). He was 27.

The tree of liberty must be refreshed from time to time with the blood of patriots and tyrants. It is its natural manure.