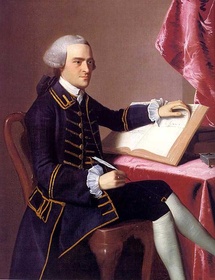 John Hancock, American Revolutionary statesman, was born in Braintree (now Quincy), Massachusetts, in 1737. After graduating from Harvard in 1754, he entered the mercantile house of his uncle, Thomas Hancock of Boston, who had adopted him, and on whose death, in 1764, he became heir to a large fortune and a prosperous business.

In 1765 he became a selectman of Boston, and from 1766 to 1772 was a member of the Massachusetts general court. An event which is thought to have greatly influenced Hancock’s subsequent career was the seizure of the sloop Liberty in 1768 by the customs officers for discharging, without paying the duties, a cargo of Madeira wine consigned to Hancock. Many suits were thereupon entered against Hancock, which, if successful, would have caused the confiscation of his estate, but which undoubtedly enhanced his popularity with the Whig element and increased his resentment against the British government.

He was a member of the committee appointed in a Boston town meeting immediately after the Boston Massacre in 1770 to demand the removal of British troops from the town. In 1774 and 1775 he was president of the first and second Provincial Congresses respectively, and he shared with Samuel Adams the leadership of the Massachusetts Whigs in all the irregular measures preceding the American Revolutionary War. When General Thomas Gage sent British troops to Lexington and Concord on 18–19 April 1775 to secure materials of war, he also intended to capture Hancock and Adams, who were temporarily staying at Lexington. These two leaders were expressly excepted in the proclamation of pardon issued on the 12 June by Gage; their offenses, it was said, being of too flagitious a nature to admit of any other consideration than that of condign punishment.

Although at first unfriendly to the Federal Constitution as drafted by the convention at Philadelphia in 1787, he was finally won over to its support, and in 1788 he presided over the Massachusetts convention which ratified it.

Hancock was not by nature a leader, but he wielded great influence on account of his wealth and social position, and was liberal, public-spirited, and, as his repeated election — the elections were annual — to the governorship attests, exceedingly popular. He died at Quincy in 1793.

Wounds [from battle] were first cleansed with lint, either dry or wet with oil, and bandaged lightly. Later they were to be washed with a digestive — a substance used to draw pus — and then covered with a bread-and-milk poultice, with oil for moisture. For the first twelve days, a cooling regiment of medicines and diet was recommended, on the theory that this lowered the danger of infection. The empiricists among the medical men of the time had noticed that a man ran a fever with an infection, and concluded, with somewhat superficial logic, that keeping him cool would lower the chances of the infection taking root.

Unfortunately, there was little or no interest in using clean bandages or instruments.